In this note I shall introduce the Frölicher-Nijenhuis bracket – a powerful tool, especially when dealing with connections on fibre bundles.
Let

be a fibre bundle. In the previous note we have seen that the connection form

(in fact, in values in

) This leads us to a more general subject of natural operations on tangent valued-forms.

be any differentiable manifold, and let us consider the space of tangent valued forms on

be the graded algebra of ordinary differential forms on

Then the (graded) space

of tangent-valued forms can be written as

In the following we will use the capital indices

to refer to local charts

is such a form, then

assigns to each tangent vector

In coordinates it is represented as

In general, an element of

Given a vector field

into itself, the definition being

These three operations on number-valued differential forms have the following important properties (note: the commutators are graded commutators):

the third tangent-valued form. Because of its bilinearity it is enough to define it on simple tensors. For

it is defined by the following formula:

In coordinates the Frölicher-Nijenhuis bracket is given by the following explicit expression:

If we want to write the sam formula in a more explicit form, then antisymmetrizations and combinatorial factors enter: 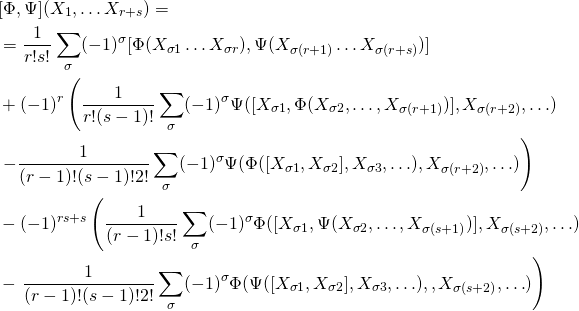 As an exercise let us compute

is the identity tangent-valued form (the natural soldering form), with coordinates

commutes with every tangent valued form.

is a vector field. It can be also considered as a tangent-valued 0-form:

We then find that

Therefore for vector fields the FN bracket reduces to an ordinary Lie derivative.

Another insight into the nature of the FN bracket comes from considering tangent-valued forms as operators on diferential forms. First of all, for any

we can define a graded derivation

Now I have a problem. In references [1] and [2] we have the following local formulas:

In our notation this would be:

But I am not able to reproduce this result. It seems to me that the factor

is missing in front of the expression on the RHS. I will return to this enigma at the end of this note.

Remark. Notice that in these formulas we assume

Then we define the Lie derivative

of a differential form

Again it is instructive to calculate the action of

and of this extended Lie derivative for

we obtain that for

But the identity map is not a graded derivative (of degree 0 in this case). On the other hand, from the formula involving vector fields I am getting

This looks good, because then

as it should be.

At this point I have to pause until this point is clarified. Perhaps I am missing something evident? I don’t know.

And here are the conventions concerning differential forms used in [1] and [2]:

with a fibred chart

are local coordinates on the base manifold

are coordinates along the fibres. If we have two fibred charts, then on their intersection domain we have

with the transformation laws:

span what is called the vertical subspace in

This subspace, consisting of vectors tangent to the fibers, is independent of the chart. There are no a priori distinguished `horizontal’ subspaces. The subspaces determined by vector fields

change when the charts change. A preferred distribution of horizontal subspaces is determined by what is called an Ehresmann connection. Once such a connection is given, vector fields

can be lifted to horizontal vector fields tangent to

Remark: In principle we should use a different notation for vector fields

and vector fields induced on

Using the same notation for both can lead to misunderstandings when is not paying attention to the context.

Let us denote by

the horizontal lifts induced by an Ehresmann connection on

They can be written uniquely in the form:

Remark: In Finsler geometry instead of

so that the formula for the horizontal lift reads

is a vector field on

we denote its horizontal lift by

Suppose now we have two charts,

Since both are supposed to describe the same horizontal distribution, they must be related by an invertible matrix

Substituting now the definitions we have

We can distinguish two special classes of transformations. First class consists of changes of coordinates on

without reparametrizing of the fibers. For these transformations

The second class consists of transformations of the form

For these transformations we have

is a vector bundle, then the reparametrizations of the fibers compatible with the vector bundle structure are linear and of the form:

In this case the last formula reads:

Given an Ehresmann connection represented by horizontal vector fields

Under fiber reparametrization we have:

It is convenient to code the connection given by a horizontal distribution in one geometrical object. This can be done by introducing the curvature form – a one-form on

with values in the vertical distribution. Given a vector tangent to

The curvature form vanishes automatically on the horizontal vectors

therefore it easily follows that 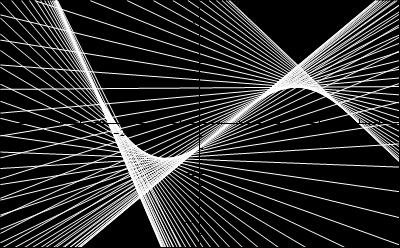