This one is another purely technical post. The point is that I am not very happy with all the existing expositions about Jacobi elliptic functions. I want to organize it my way which, I am sure, is better than all other ways. Of course what is better and what not depends on the interests of the particular person and on the purpose of the study. I am not completely sure what my purpose is, but somehow I am navigating and, at some point, I will be able to shout: Tierra! Tierra! But not yet. So I continue.

First: a summary of the essential properties of the elliptic functions

Quite often the argument

is omitted, it simplifies the notation. Sometimes we use

For instance in the formulas above

should be written as

but some people will write it as

After some little training there should be no confusion.

Previously, we have also found the addition formula for

We could also prove the addition formulas for

but I will not do it. I am just copying, for instance Eqs (48)-(50) in Jacobi Elliptic Functions, on Wolfram’s site

We have also defined

we have defined the function

as the inverse function of

is called “the incomplete elliptic integral of the first kind“. From the shape of the function 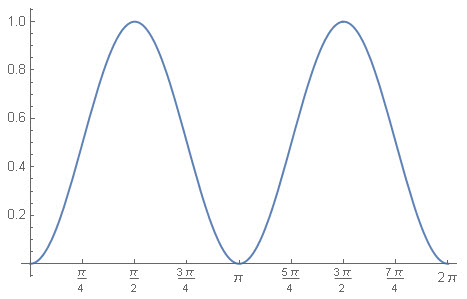 it is clear that

is called the complete elliptic integral of the first kind, and denoted as

Thus we can write

This way we can build the following table

Then from addition formulas we obtain:

goes through the negative values.  Thus

is, in general, a complex number. During the discussion under the last post Period of a pendulum, the following conjecture has appeared:

I do not have a rigorous proof of that conjecture. What I have is a plot, using Mathematica, of the numerical difference between the left and the right hand side of Eq. (9). Here it is: 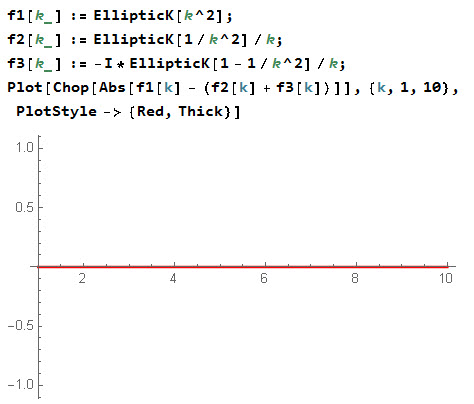 As you can see it looks like a solid zero! One can also verify that both, the real and the imaginary part of the right hand side, as a function of

satisfy the differential equation that

is supposed to satisfy – Eq. (19) in Complete Elliptic Integral of the First Kind:

But that is not yet a complete proof. Nevertheless I will assume that the above conjecture is true. To proof that the real part of

Then the real part of

I suspect that the proof for the imaginary part should not be much more complicated, but I did not succeeded doing it yet. Therefore at this point I will make a break. Till tomorrow.

The conjectured formula is well known. In the tables by I. S. Gradshteyn, I. M. Ryzhik we find

There is a condition

but there is no such restriction in the source that is quoted – MO 131. Some has added this condition later, for security reasons. We extend it to the case of

we get our formula.

In fact I can almost get this formula by changes of integration variables, except that one has to be careful what to do with the square root of a negative number. A convention is needed. The sign of the imaginary part that I am getting depends on this convention.

Here the expression under the square root is negative all the time. So we write

Now we change the integration variable

is the positive value of

Now we do the same trick that we did in the real case. We introduce

This is possible since the integration is within the range of

Here and there I was skipping explanation and justifications, but these small cracks in the proof can be easily filled in.
The conjecture appears to have been finally proved. So, it is not a conjecture any more, it is a proven property! Uff!