In the previous posts we have learned about Jacobi elliptic functions am, sn,cn, dn. It is time now to see them in action. But before we use them for unveiling the mysteries of the cosmic Dzhanibekov effect, we first give them a test run by using them for solving the swinging pendulum case. 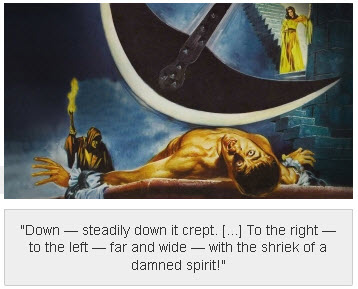 Pendulum of Death
A classic Death Trap, tracing its origins to Edgar Allan Poe’s “The Pit and the Pendulum”. The hero is strapped to a table beneath a blade mounted on a pendulum. When activated, the pendulum descends slightly with each swing, gradually getting closer to the hero.

And yes, indeed, pendulum can be dangerous. Galileo thought that the period of the pendulum does not depend on the amplitude. We can read in Wikipedia:

Galileo Galilei (Italian pronunciation: [ɡaliˈlɛːo ɡaliˈlɛi]; 15 February 1564 – 8 January 1642) was an Italian polymath: astronomer, physicist, engineer, philosopher, and mathematician, he played a major role in the scientific revolution of the seventeenth century.
He has been called the “father of observational astronomy”, the “father of modern physics”, the “father of scientific method”,[7] and the “father of science”.
…
Galileo claimed that a simple pendulum is isochronous, i.e. that its swings always take the same amount of time, independently of the amplitude. In fact, this is only approximately true, as was discovered by Christiaan Huygens. 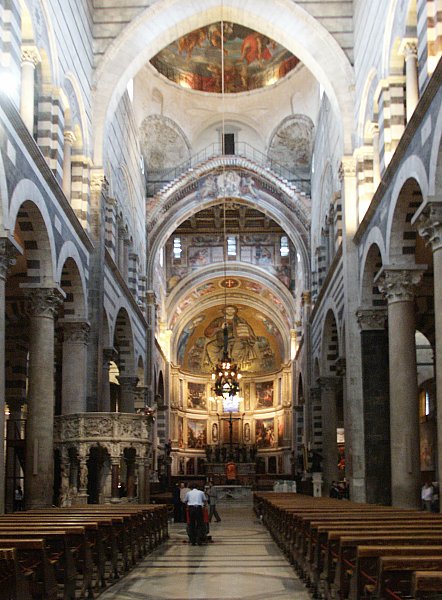 We do not know for sure if Galileo really believed that the pendulum is isochronous. Perhaps he was observing the swinging lamp inside the Duomo in Pisa. To some extent he could check whether the period depends on the amplitude or not, but it is rather hard to imagine him pushing the hanging lamp into extremely wide swings. Perhaps he has done some calculations. But, perhaps, he was very careful not to publish anything that would go again the philosophical doctrines he has chosen to subscribe to.

“I conclude with some reflections on these results. Galileo evidently knew a good deal more about circular descent than he cared to publish, and he published some things (the isochronism of the circular pendulum) which he knew to be false. Good as the Third and Fourth Days of Two New Sciences are, he could certainly have presented a far more penetrating analysis of these matters. From our perspective, the revisions and additions would have deepened and extended his treatment of the new science of motion. But from his perspective, I conjecture, these ideas causes serious problems. They do not cohere comfortably with a basic tenet of Copernican science: the perfection and uniformity of circular motion.”

The above conclusion of David Hill is speculative. And we are not studying the history of science here, we are studying mathematics as applied to physics. Therefore we need to solve the pendulum problem exactly. But, of course, we will make reasonable idealizations. Thus, for example, we will neglect the fact that the arm has some elastic properties, we will neglect air resistance, we will neglect the fact that the Earth is round and that there are earthquakes in Italy On the other hand while quite often when studying the pendulum one considers only very small amplitudes, we will allow our pendulum to have as large swings as one wishes them to have – even through the roof. Only then our elliptic functions will truly reveal their glamour. So, let’s go to the business.

We will need a picture, and I will borrow the picture as well as my inspiration from “Elliptic Functions and Applications” by Derek Lawden. Here it is: 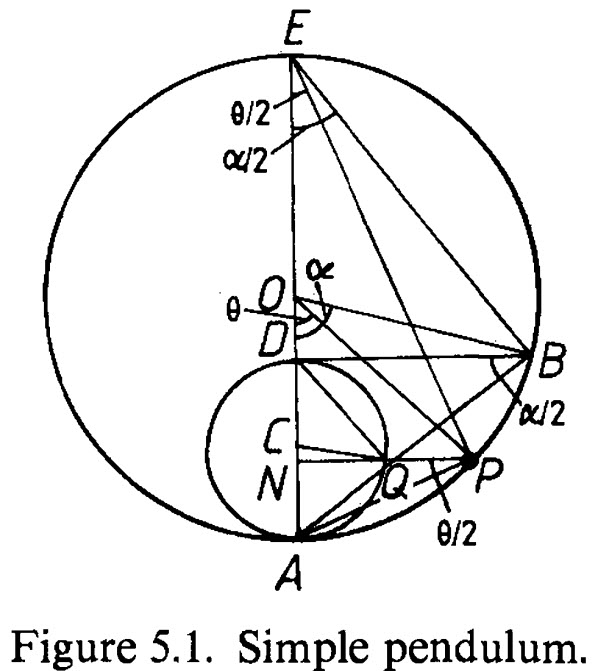 The pendulum on the picture is hanging from the point O in the center of the circle. This is a mathematical pendulum. The arm OP is inessential. What is essential is the point mass m, here depicted as the point P. The radius of the circle is the length of the pendulum,

Here, with this picture, we are assuming the the initial push given to the pendulum is not too large. Thus the pendulum, when swinging to the right, can reach at most the point B. The current angle of the pendulum is

the maximal angle is

Later on we will deal with the case of a pendulum with enough energy to complete full circles, but for now let us restrict our attention to “tamed pendulums”.

However, even when if our pendulum is tamed, to avoid the swing of the sharp edge that right now is approaching us in the pit, I will stop now, and will continue with the math tomorrow.

6 thoughts on “The case of the swinging pendulum”