Restarting my blog I am inviting you on the board of Salyut 7 in 1985. Vladimir Dzhanibekov, Russian cosmonaut from Uzbekistan.

Dzhanibekov made five flights: Soyuz 27, Soyuz 39, Soyuz T-6, Soyuz T-12 and Soyuz T-13. In all he had spent 145 days, 15 hours and 56 minutes in space over these five missions…. In 1985 he demonstrated the tennis racket theorem, subsequently also called the Dzhanibekov effect, by showing that in free-fall rotation about an object’s second principal axis is unstable.

Do not believe Wikipedia in this respect (and do not believe it in general, always do the check using independent sources). He did not demonstrate the “tennis racket theore” – it was not known yet. He, Dzhanibekov, has found, by pure chance, just playing, something very very strange. Some very strange behavior of a winged nut. Flipping its axis for no reasons at all. Something that was not in the textbooks on space mechanics. Perhaps a window into some new physics?

the Earth’s axis can flip any time for apparently no reason. Like in a butterfly effect. Is it true? What is secret about the effect, and there was a secrecy at the beginning. Little by little I will reveal all the detail that you will not find anywhere else. At first I did not know anything about the subject. My own university course of classical mechanics was based on Landau-Lisfshits book, a good one, but the teacher did not go to the rigid body mechanics. Very bad. So I had to start from the beginning. And now I want to share what I have learned. Of course it will need a little bit of math. Not a very hard math – just at the level of a technical college. Of course you can always skip the math, look at the pictures and read the comments. You can also ask questions.

As this is my blogging restart, I do not have yet a “method” or a “form” as how to write. But this will come with time. Today I start with quaternions. They are interesting for several different reasons. Mainly for computer 3D games programmers, and for satellite navigation.
———————-
The paper [1] entitled “The Twisting Tennis Racket” begins with these words:

In fact the aspect of the motion that is relevant here is known as “Dzhanibekov’s effect” (or Janibekov’s effect) and has been discovered by the USSR cosmonaut V. A. Dzhanibekov on the board of the space station Salyut 7 in 1985. According to the information given in [2]

“For 10 years, Janibekov’s effect was considered to be secret. However, the discovery of Janibekov became a push to the development of the quantum study of the macroscopic world.”

The paper [1] , was probably indirectly `inspired’ by the Dzhanibekov’s 1985 experiment, that nowadays can be viewed on Youtube [3]. The twisting tennis racket is a rather poor example of the effect, when comparing with the periodically flipping winged nut inside of the space station:

But due to the official pseudo-secrecy the authors of the “Twisted racket theorem” had to choose an example using their own imagination. In order to appreciate the effect one really has to first watch the movies taken in space, and now there are several of them available.

There are also several animations available on internet. Wikipedia [4] provides a link to a Russian page with a link to a software written in Delphi and showing a simulation of a flipping nut. 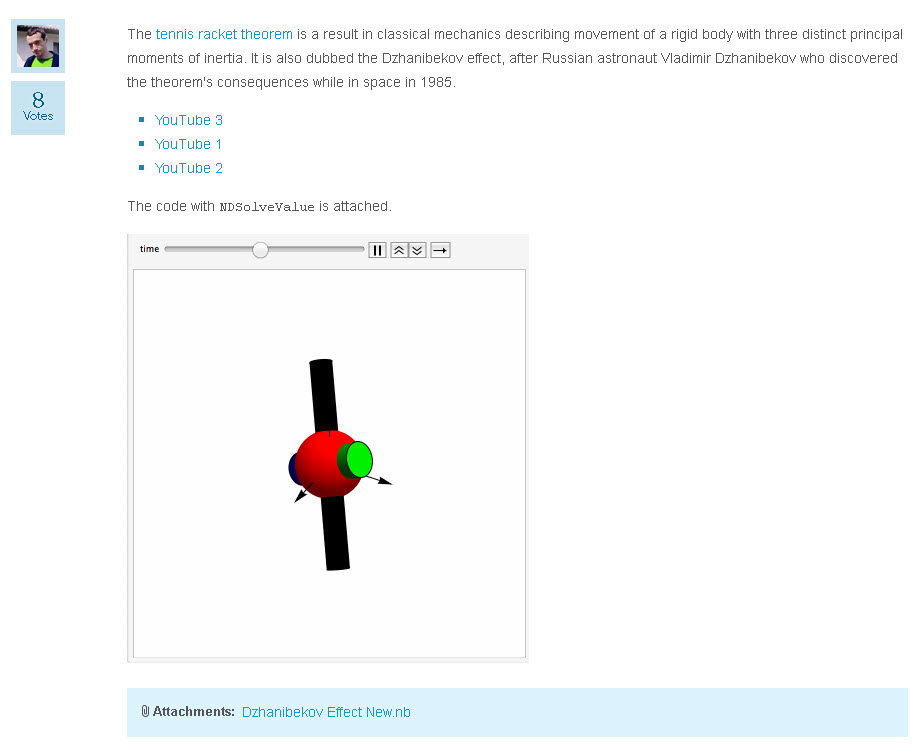 It was observed by V. Arnold [8] that the motion of a free rigid body describes a geodesics of a left-invariant metric on the rotation group (for more details cf. Appendix 2 in [9] and [10]). It is usually more convenient to use quaternions instead of Euler angles for describing the orientation of a rigid body in space. Unit quaternions form a double covering group, isomorphic to SU(2), of the rotation group. The group SU(2) has the topology of the sphere

and so can be stereographically mapped (excluding one point) onto \math[\mathbf{R}^3.[/math] Therefore trajectories of the flipping top can be visualized in 3 dimensions. It is for these reasons in these notes I will be describing the solutions of the attitude equations explicitly using quaternions and stereographically projecting the solution into \math[\mathbf{R}^3,[/math] in this way visualizing the geodesics, where the left-invariant metric
is determined by the inertia tensor of the body.

Instead of starting with the explicit solutions of Euler’s and attitude equations, I will start these notes with quaternions and the Hopf fibration.

Let us concentrate on

and its action on the sphere

of unit quaternions from the right (the “right shift”). If

We will continue, in the forthcoming posts, with visualizing these trajectories using stereographic projection.