Forbes is a global media company, focusing on business, investing, technology, … On Aug 26, 2016 @ 02:20 PM Forbes featured an article with the title “This Is The Hardest Concept To Grasp In Physics (Hint: It’s Not Relativity)“

A famous Harvard physics professor (Ed Purcell maybe?) said that undergraduate physics students come in expecting that the hardest thing they’ll have to learn will be either relativity or quantum mechanics. Actually, those are the most novel topics (i.e., the ones involving notions that are the most surprising from our ordinary, common-sense perspective). The hardest thing that an undergraduate physics students must learn is the classical dynamics of spinning tops (also called “rigid bodies” in this context).

Can it be true? How comes? And yes, that is true. Look: 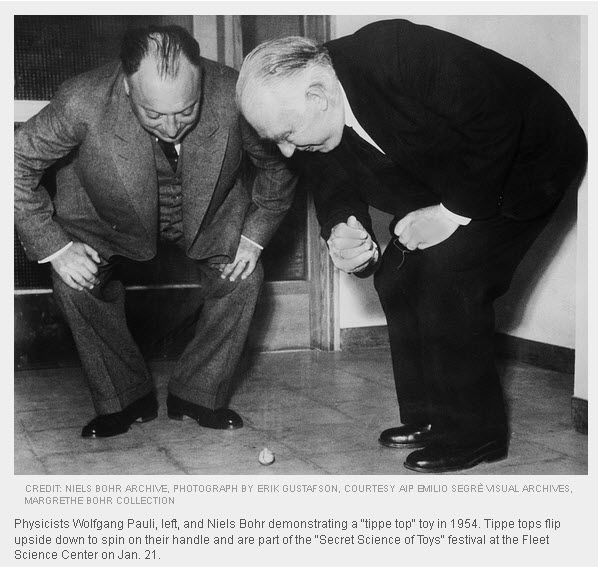 Wolfgang Pauli, “… received the Nobel Prize in Physics for his “decisive contribution through his discovery of a new law of Nature, the exclusion principle or Pauli principle”. The discovery involved spin theory, which is the basis of a theory of the structure of matter.” Niels Bohr – “… a Danish physicist who made foundational contributions to understanding atomic structure and quantum theory, for which he received the Nobel Prize in Physics in 1922.” And a spinning top. The hardest concept to grasp in physics.
The head is spinning 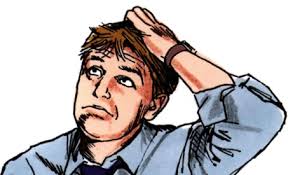 Having taught classical mechanics to advanced undergraduates in physics, I find this to be true. The following figure, which I’ve taken from chapter VI, sec. 37 of the Mechanics by Landau and Lifshitz, shows possible values of the angular momentum vector, in the non-inertial body frame, for a free, asymmetric top. The ellipsoid is a surface of constant energy, and the closed curves are given by the intersection of that ellipsoid with spheres of various radii, corresponding to different values of the total magnitude of the angular momentum: 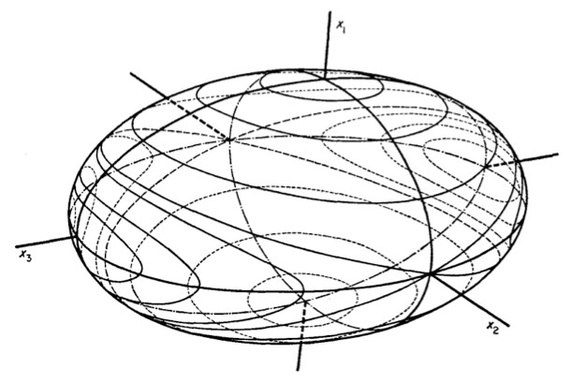 We need to know what it is about. And, in fact, we are quite ready. Yesterday in “Solving Euler’s equations” we have learned that there are two important conserved quantities in rotations of a free asymmetric top about its center of mass: the length

of the angular momentum vector, and the kinetic energy

. They have simple expressions in the orthogonal frame attached to the body and aligned along its principal axes:

are the three components of the angular velocity vector in the moving frame. While

are constants that depend on the shape and the mass distribution within the body, the angular velocity vector

is, in general, time-dependent. Our aim now is to draw the trajectory

– that is what the picture from Landau and Lifshitz book is all about. And since it is such a hard thing to understand, we surely want to know it! It will make us feel better! It will add meaning to our lives.

But, perhaps, we do not want to type Greek letters? Why not use Latin letters? So, instead of using

Then our two important constants of motion read:

We are not interested in the case when nothing really rotates, so we will assume that

It is then convenient to introduce dimensionless vector

which means that the vector

traces a trajectory on the unit sphere. Eq. (4) becomes then

Eq. (6) is an equation of an ellipsoid. So, we need to know how an intersection of a sphere with an ellipsoid looks like? And we are dedicated to know it, because it is a part of the hardest concept in all physics! Apart of being hard, it also proves to be pretty. So how do we do it?

In the monograph by Vladimir Rovenski, entitled Modeling of Curves and Surfaces with MATLAB® (Springer Undergraduate Texts in Mathematics and Technology) 2010th Edition, on p.231, we find a section on “Sphere intersects ellipsoid.” That is what we need! But what we read there, to our surprise, is:

The sphere of radius R (with center O) intersects the standard ellipsoid with the axes a > b > c. The best method to parameterize these curves comes from mechanics, namely, from solutions of Euler’s differential equations of the rotation of a rigid body about a ﬁxed point in space.

So, that is what we are going to do. We are going to use our solution of the Euler equations in order to draw intersections of the sphere (5) with ellipsoids (6) for various values of the parameter

I will use Mathematica to this end, but I am pretty sure it can also be done using free software such as Maxima.

It is very important, when explaining the hardest concept in physics, to use a correct strategy. The best is the military strategy.

Here is the essence, taken from The Institute of World Politics:

The nature of strategic surprise in warfare is such that it confounds and negates an enemy’s strategy, and indeed his purpose – not just his objective – and ultimately his policy, thereby making irrelevant and futile his entire, following effort

So, here is my strategic surprise: the image produced by Mathematica that is created using the solution from the previous post. 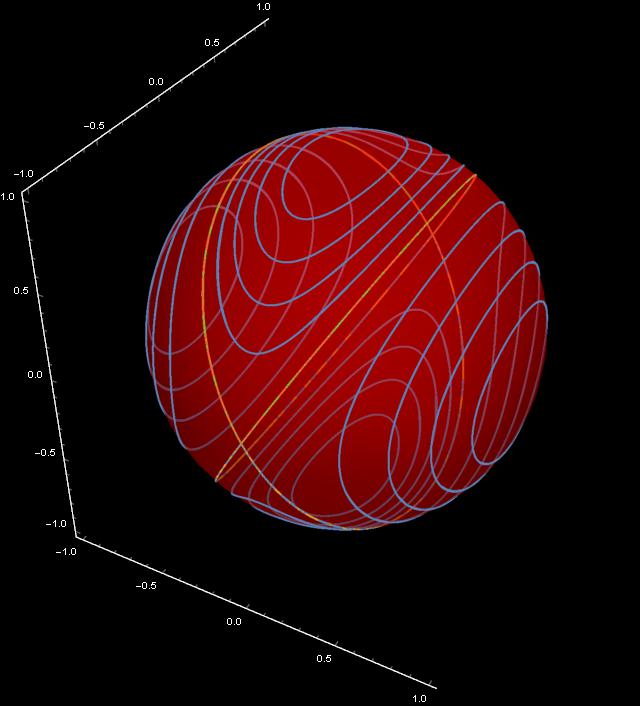 It certainly looks better than the poor plot from Landau and Lifshitz used by Forbes. Moreover, I have full control over it. Can change shapes, colors, parameters of curves…. Any wishes?

But I will explain all this in the next post. For now just remember that

Strategic surprise is a continuing intellectual, political, military, and technological problem of high importance for the U.S.