Why are geodesics important? Probably because they are very simple. They are, in a sense, the simplest possible paths. Quoting from Richard Buckminster Fuller Domes and archives, 1960, 1965 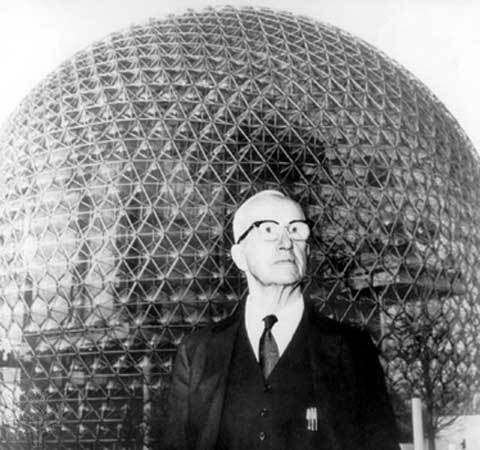 Fuller inspired by his observations of nature. The inventor applies the concept of the geodesic line (the shortest line joining two points on a surface) to construct the most balanced, lightweight and resistant structure possible. His domes are a synthesis of all of the inventor’s fundamental precepts, combining a reasoned and aesthetic use of technological progress with a holistic conception of man’s relationship to nature. Such was the reputation of the inventor in the scientific domain that a family of carbon-based molecules with a geodesic structure was named after him: Buckminster fullerenes, later changed to fullerenes. Many of these molecules have played a role in recent nanotechnology discoveries.

Quoting from Wikipedia – Geodesics on an ellipsoid :

Geodesics on an ellipsoid of revolution
There are several ways of defining geodesics (Hilbert & Cohn-Vossen 1952, pp. 220–221). A simple definition is as the shortest path between two points on a surface. However, it is frequently more useful to define them as paths with zero geodesic curvature—i.e., the analogue of straight lines on a curved surface. This definition encompasses geodesics traveling so far across the ellipsoid’s surface (somewhat more than half the circumference) that other distinct routes require less distance. Locally, these geodesics are still identical to the shortest distance between two points.

If the Earth is treated as a sphere, the geodesics are great circles (all of which are closed) and the problems reduce to ones in spherical trigonometry. However, Newton (1687) showed that the effect of the rotation of the Earth results in its resembling a slightly oblate ellipsoid and, in this case, the equator and the meridians are the only closed geodesics. Furthermore, the shortest path between two points on the equator does not necessarily run along the equator. Finally, if the ellipsoid is further perturbed to become a triaxial ellipsoid (with three distinct semi-axes), then only three geodesics are closed and one of these is unstable.
….
On a triaxial ellipsoid, there are only three simple closed geodesics, the three principal sections of the ellipsoid given by X = 0, Y = 0, and Z = 0. 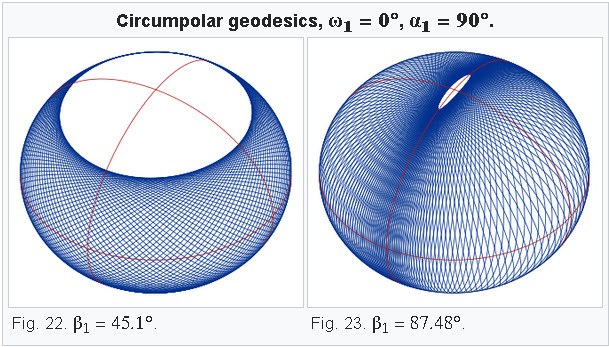 And we do have geodesics, even if we have to wait a little bit to see them nicely introduced in this series of posts. Histories of rotations in the rotation group are geodesics. We have seen a bunch of them in two previous posts. These were closed. Nothing particularly interesting – who did not see a circle? True, we have seen a bunch of circles spanning a torus, but these were generated artificially by a rotating observer.

But no it is time to move beyond the safe mode. If you have a spinning top in free space, and if you struck it, like Peggy Whitson

it will start to nutate. And when all three moments of inertia are different, this nutation is non-periodic. Geodesics have infinite length. They are certainly not the shortest connections between points in the group, in any sense. One geodesic line is wandering through the three-dimensional sphere

sometimes almost returning to the starting point, then traveling far away. Strange are these trajectories.

Below is a part of one such trajectory, for

I am rotating it in animation, so that you can have a better view of its 3D structure. Of course, as in previous posts, this is stereographic projection from

Of course I will have to explain the details …