In this note I will repeat some stuff that I was already explaining in the past, but we will also find some important new stuff.
The time evolution differential equation for the attitude matrix

is the angular velocity vector in the body frame, and

into skew-symmetric matrix as follows:

It has the property that for any vector

in the laboratory frame is defined by

maps coordinates of vectors in the body frame into their coordinates in the laboratory frame. Thus

and so Eq. (1) follows.
While description of rotations in terms of orthogonal

matrices in principle suffices in classical mechanics, sometimes it is convenient to use the group of quaternions of unit norm, the group isomorphic to the group

used in quantum mechanical description of half-integer spin particles. Quaternions have some advantages in numerical procedures (as for instance in 3D computer games), but they are also convenient for graphical representation of the intrinsic geometry of the rotation group. And this is what interests us, when we plot trajectories representing history of a spinning rigid body.

Quaternions of unit norm, representing rotations, form a 3-dimensional sphere in 4-dimensional Euclidean space, and we are projecting stereographically this sphere onto our familiar three-dimensional space, where we orient ourselves in a usual way known from everyday experience.
The question therefore arises: how the equation describing the time evolution looks like when represented in the quaternion setting?
To derive it we have to return to the fundamental relation between quaternions and rotations of vectors in space.
For every vector

the pure imaginary quaternion defined as:

Then to unit quaternion

that is such that

such that for all

is the commutator. The property follows directly form the definitions and from the quaternion multiplication rules. Every pure imaginary quaternion is of the form

Derivation:
As shown on plaque by the Royal Canal at Broome Bridge in Dublin, 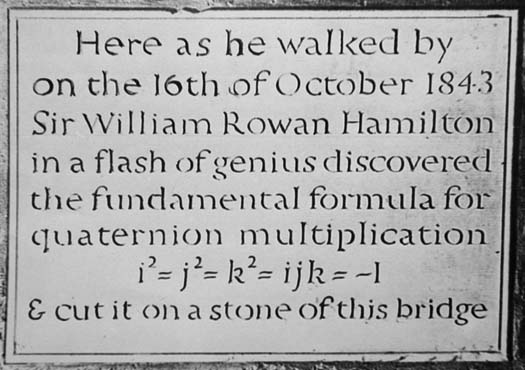 the essence of the quaternions is contained in the four equations

From these, multiplying from the left and/or from the right by

From the definition of the hat map we have

When we expand the parenthesis and use the multiplication rules in Eqs. (9),(10), we find that the terms with squares cancel out, while the terms with products like

etc. can be organized as follows

is a trajectory in the space of unit quaternions, while

is the corresponding trajectory in the rotation group. Thus we have

We now differentiate both sides with respect to

On the left we use the standard product rule for differentiation, but we pay attention so as to preserve the order, because multiplication of quaternions is non commutative. On the right we enter with the differentiation under the “hat”, because it is a linear operation. We obtain:

In order to get rid of

we differentiate the defining equation of unit quaternions

Putting this into Eq. (15) and multiplying both sides on the right by

Multiplying from the left by

From Eq. (16) it follows that the quaternion

Since the above holds for any

Note: It may be that the final formula can be derived in a shorter way, but I do not know how. It is this last formula that I was using when verifying that the algorithm provided in Meeting with remarkable circles gives indeed a solution of the evolution equation.