can be uniquely represented as a product

is positive matrix, and

is a unitary matrix. We have

is the cross section of the donut, the angle

goes around the donut.

Today we will look at the orbits produced inside the donut by the action of the unitary group.

Our group has two such complex numbers on the diagonal,

and its complex conjugate

but it is isomorphic to U(1) – it is essentially the same group. If you have one dollar, and its reflection in a mirror – you do not have two dollars. If you spend one, the reflection is also spent…. Perhaps it is not a very good example…. What if you spend the reflection to save the real buck?

So, what are these orbits? We are interested in orbits produced by action of matrices

from the right. So let us take some element

from the group. We are going to act on this element with matrices

from the right. In order to avoid confusion, we will use

as the argument of the matrices tah act on

from the right. We get

is constant along the orbit. Only parameter

is changing. That is, we move around the donut, keeping the position on cross sections fixed. To know the orbit it is enough to know the point of its intersection with one fixed cross-section. Here is the plot of several such orbits: 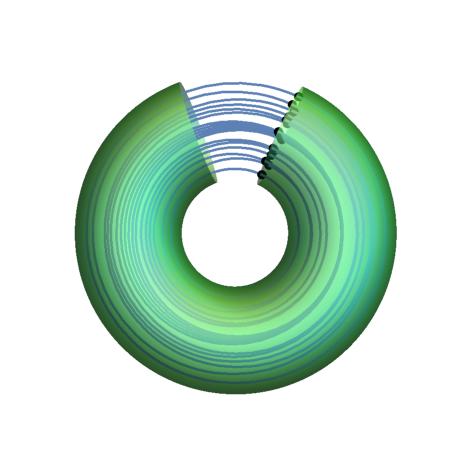 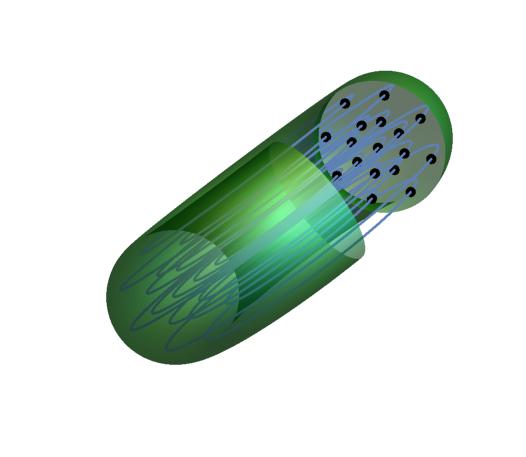 On the images it may look as if orbits can intersect, but this is only because of perspective. Two orbits either coincide, or they are disjoint, they do not have common points.

I took out a piece of our donut only for us to see better what is inside. The group is the whole donut, and orbits go inside.

So, to different orbits there correspond different complex numbers

inside the disk, and I will give you the orbit. So, I have made the points of intersection of orbits with one cross-section, namely the one for

somewhat bigger. Each such point determines an orbit.
The inside of the unit disk can be considered as the space of orbits.

We can look at these orbits in a somewhat different way, as follows. To each matrix

Let us give some name to this association, let’s call it

Two points on the same orbits map into the same

Let us see that it is indeed so. Let

What about orbits from the left action? We will look at the next post.