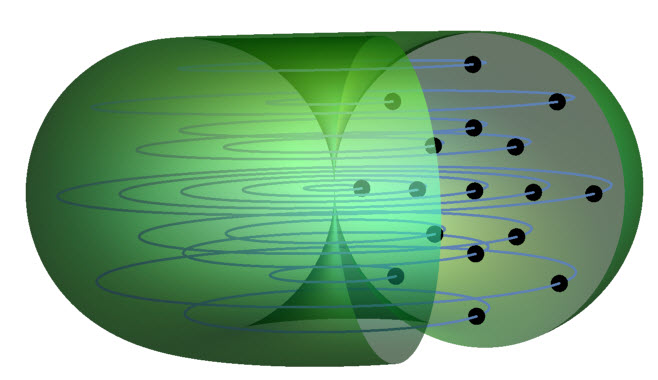 Abstractly it follows from the following reasoning:

Question: When are the given two points

in SU(1,1) on the same orbit of U(1) acting from the right?
Answer: It happens if and only if there exists

by left translating with a given element

on one orbit? That is: does there exist

? And the answer is: YES. Even more, they are related by the same

So by acting from the left with a given element the circular orbit is transformed into another (perhaps the same) circular orbit. Circular orbits are parametrized by points

of the unit disk

. Therefore SU(1,1) acts on the unit disk. That is abstract. But how it is in equations? The answer follows easily using the formula that we already know from previous posts about SU(1,1).

Suppose we are given

We construct from it a positive matrix

Now we act on it from the left with an element

We obtain another element

Thus we arrived at Eq. (15) from Getting hyperbolic. It was postulated there without any explanation. Now we have derived it.

maps the origin of the disk, the point

It follows that the action of SU(1,1) on the disk

is transitive. For any two points

using the transformation (5). Namely, we know that

. Another way of expressing the particular properties of this action is by saying that

is a homogeneous space for SU(1,1), with

as the stability group.

Indeed, for the matrices from

Conversely, as it is really easy to see, any matrix from SU(1,1) that transforms

must be one of the

Once we know that, we can start studying the geometry of the disk. 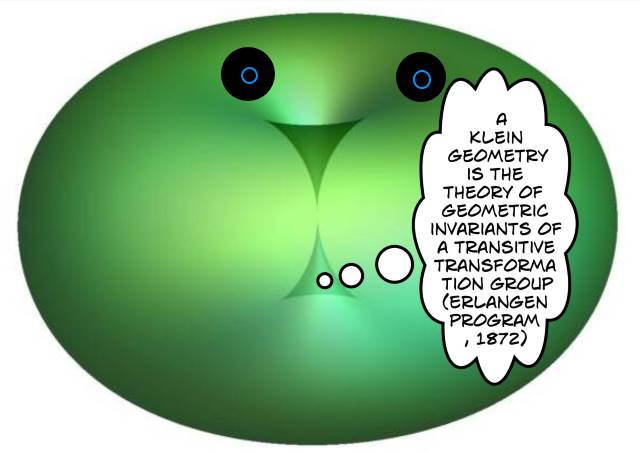 We do have transitive transformation group, here acting on

. That means we are ready for implementation of the Erlangen Program. Quoting from Wikipedia:

The Erlangen program is a method of characterizing geometries based on group theory and projective geometry. It was published by Felix Klein in 1872 as Vergleichende Betrachtungen über neuere geometrische Forschungen. It is named after the University Erlangen-Nürnberg, where Klein worked.

By 1872, non-Euclidean geometries had emerged, but without a way to determine their hierarchy and relationships. Klein’s method was fundamentally innovative in three ways:

Klein proposed that group theory, a branch of mathematics that uses algebraic methods to abstract the idea of symmetry, was the most useful way of organizing geometrical knowledge; at the time it had already been introduced into the theory of equations in the form of Galois theory.

Klein made much more explicit the idea that each geometrical language had its own, appropriate concepts, thus for example projective geometry rightly talked about conic sections, but not about circles or angles because those notions were not invariant under projective transformations (something familiar in geometrical perspective). The way the multiple languages of geometry then came back together could be explained by the way subgroups of a symmetry group related to each other.

Wikipedia mentions also (with a silly mistake that I have fixed below skipping the first four words):

The Erlangen program can therefore still be considered fertile, in relation with dualities in physics. 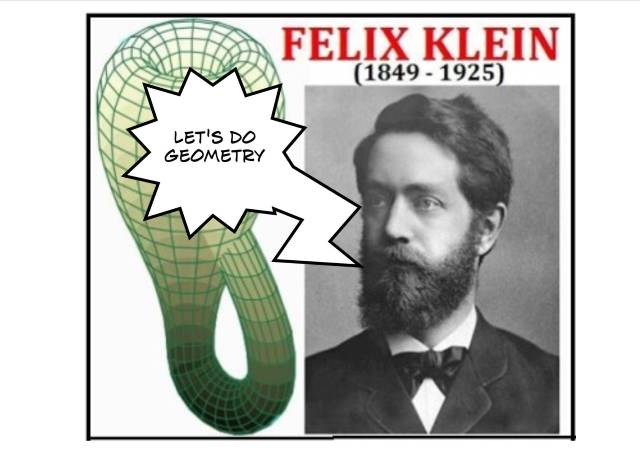