Non-Euclidean geometry was invented because not everybody was happy with the fifth postulate of plane Euclid’s geometry. The fifth postulate can be formulated in several equivalent ways, one of its versions, the one that is of interest for us, states that for every straight line and every point that is not on this line, there is a unique parallel line passing through this point. The definition of parallel lines is that they extend infinitely long in both direction without intersection.

We started playing with parallel lines of the disk geometry in the last post. We will continue it now, but, for change, we will play a little bit more with the devil of the algebra.

Our hyperbolic geometry model is based on invariants of the fractional linear action of SU(1,1) on the unit disk

in the complex plane. The group SU(1,1) acts transitively on the disk. In SU(1,1) decomposition we have seen that every matrix

in SU(1,1) can be uniquely decomposed into a product

The fractional linear transformation defined by

Remark: Given a complex

This is our choice. Another possible choice, that is often used, would be

is positive, but positivity is not an intrinsic (or “natural”) property within SU(1,1). If

but it is not necessarily positive. While it also has positive eigenvalues, it is not necessarily Hermitian. Intrinsic, natural, properties should be invariant under similarity transformations. Therefore, if only for esthetic reasons, for beauty and for pleasure, we will take now a different road. Within the group SU(1,1) there are special matrices known as parabolic. Parabolic matrices are characterized by the property that they have trace equal 2. This property is invariant under similarity transformations. Our matrix

has trace different from 2. But we can compensate it by multiplying from the right by a unitary matrix, and that is what we will do now.

from the right we get

If we want to obtain trace equal 2, we should have

we have two possibilities:

Let us choose the first possibility. Then

We define, for each

in the disk, the matrix

as before, but now

In Hyperbolic geometry – Playing with parallels we were constructing SU(1,1) transformations that were mapping the straight line on the real axis on the disk into parallel lines that were limiting parallel lines – they asymptotically converged to the points

on the unit circle – the boundary of the disk:

Here I will do the same, but using a different method, with parabolic transformations. The advantage will be that all will be clean algebraic, no hyperbolic or trigonometric functions will be needed. The devil of the algebra will be collaborating with the angel of geometry in one common project. 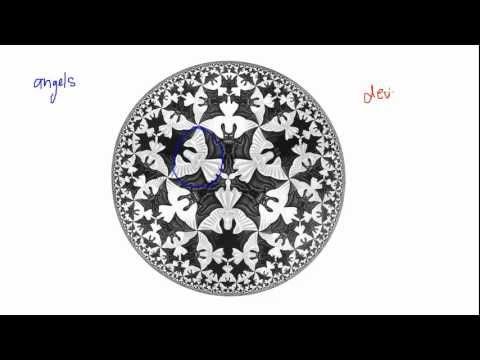 that leave the point

after some simple manipulations, we obtain a particular solution (I am using Mathematica for such tasks):

Substituting this expression in the formula for

Then the formula simplifies dramatically:

This way we have obtained a very simple family of parabolic transformations, each of them having the point

fixed. Below is the result of applying these transformations to the straight line along the real axis for

is, in fact, a one-parameter group of parabolic elements in SU(1,1). We have

has the “nilpotent” property

Repeating the same as above, but for

we would get one-parameter group of parabolic matrices

Let us now return to the transformations

and how they transform the points on the real axis into a segment of a circle – circle according to the Euclidean geometry, straight line according to hyperbolic geometry. Using Eqs. (9) and (3) we get:

Let us take one particular line, say, for

the imaginary part at this point is

Thus the line defined by

transformation intersects the vertical imaginary axis at the point

The same holds for the line defined by

So far we know two of them – the limiting lines:

First: how to draw all straight lines passing through

? Simple: we draw straight lines through the origin

which is easy. Then we shift it to the point

and the positive operation 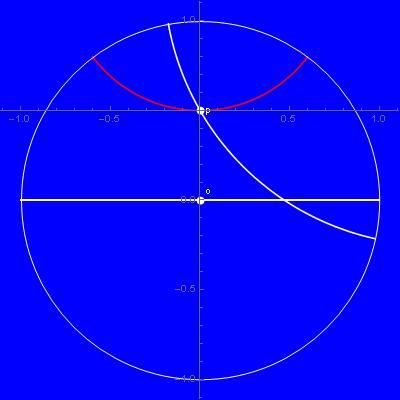 The red line is the shift of real axis by

The white line is the shift by

, at right angle, in a left-right symmetric way. The white line, on the other hand, crosses the horizontal and the vertical line at the same angle. I did not try to prove it, but it seems from the graph that this is the case. If so, then a proof should be straightforward, and

could be useful for creating hyperbolic squares and demonstrating that the larger is the square, the smaller is the sum of its four angles.

, and parallel to the real axis, it is more convenient to use

the line through the origin is

We look at the left end, for

and find for which

That is easy and the result is

In fact, we could obtain this value by examining the angle of intersection of the limiting line with the vertical. I checked it numerically. Geometrical justification is probably easy. Notice that our particular angle happens to be one of the angles of the famous Pythagorean 3-4-5 triangle. 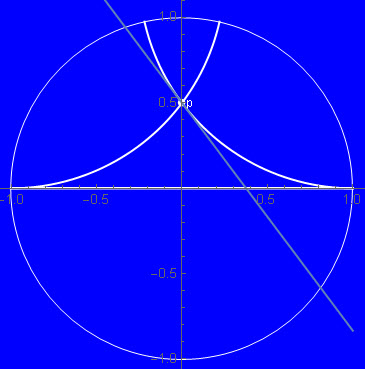 We can now draw a family of straight lines through the origin, with angles between