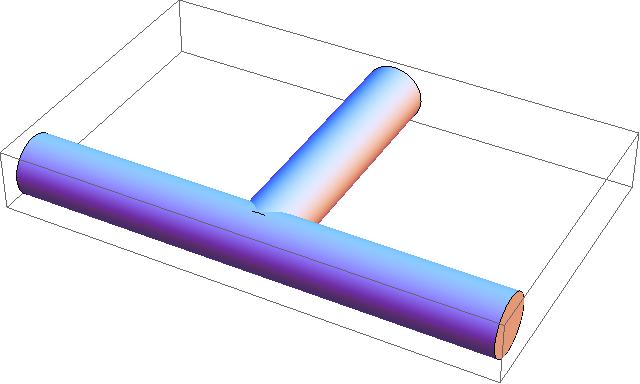 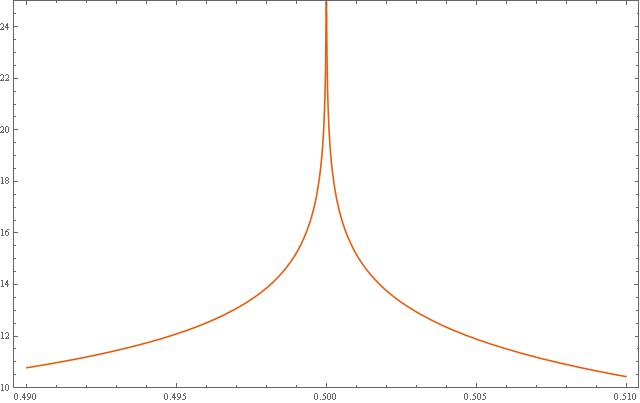 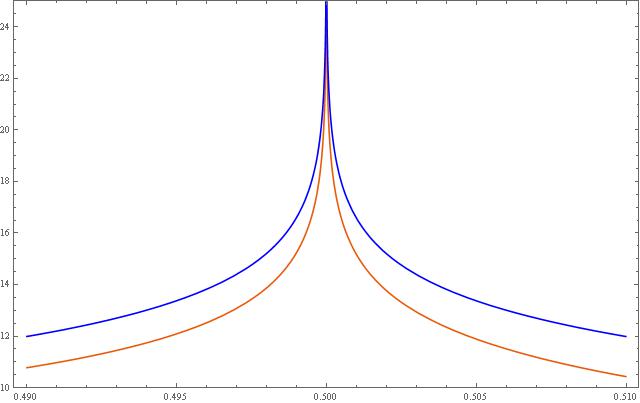 And here are more detailed instructions with narration in Polish, but it should not matter, because you see all the details:

The bearing ball inside, invisible, makes it to behave strangely, the “worm” flips and jumps, almost like being alive.
So much about kid’s toys. Now we are playing with another toy, that also looks like being alive. Except that it whirls and flips in space, on ISS space station:

Dzhanibekov effect is the name. It does not have a bearing ball inside. What is hidden inside are Jacobi elliptic functions. They make it to flip, for no apparent reason at all, and do it, as it seems, periodically. Why? Dzhanibekov, the Russian cosmonaut who has discovered the effect, didn’t know why. He wrote to me that it is still a puzzle for him, though he prefers now to concentrate on “quantum puzzles”.
The movie above shows a T-handle. So, in today’s post I will construct my own T-handle that will whirl and flip the same way, but without going to space. We will do it with graphics, with math, with numbers.

I want to build a T-handle with principal moments of inertia 1,2,3 (I like this sequence). It will look like this: 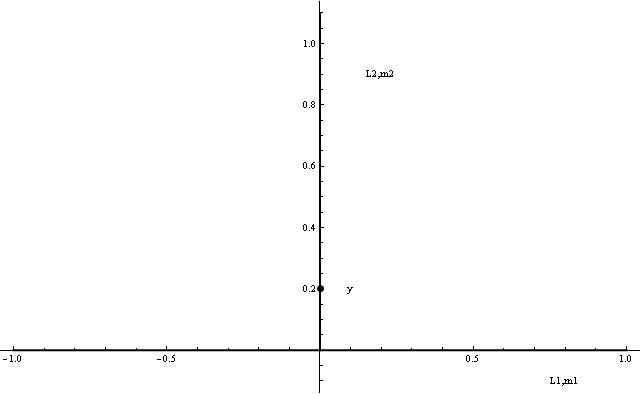 One line is along the x-axes. I fix it to have length

So the mass of the horizontal tube is

The length of the vertical part is to be found. I want it to be such that the principal moments of inertia with respect to the center of mass are 1,2,3.

It is clear, from symmetry, that the center of mass will have

-coordinate zero. We need a formula for

The center of mass of the horizontal part, that has mass

The center of mass of the vertical part, which has mass

coordinate of the center of mass of our T-handle is

Now we need to calculate the moments of inertia. First the moment of inertia with respect to the

-axis.
Wikipedia has a List of moments of inertia. There we find that for a cylinder of length

I checked, calculating it myself, and it is correct. Here is how you can calculate it:

In our case only

contributes to the moment of inertia with respect to the

-axis, because we assume our cylinders to be of zero diameter. And the contribution from

Our task is now to choose the Length

so that the moment of inertia

of the whole body with respect to the horizontal axis through

It will be convenient to use what is called “Parallel axis theorem“. From Wikipedia:

First consider the contribution from

so the contribution is

The first term here is

since the moment of inertia of

with respect to the

-axis is zero.
Then the contribution from

Substituting the expression for

after some little calculation, we get

We now solve the equation

This is fourth degree equation, we find that two roots are real, and only one is positive:

Click on the image to open the gif animation.

In the last post, Racket about tennis racket, I did not quite finish with the critical appraisal of the Poinsot-type picture: 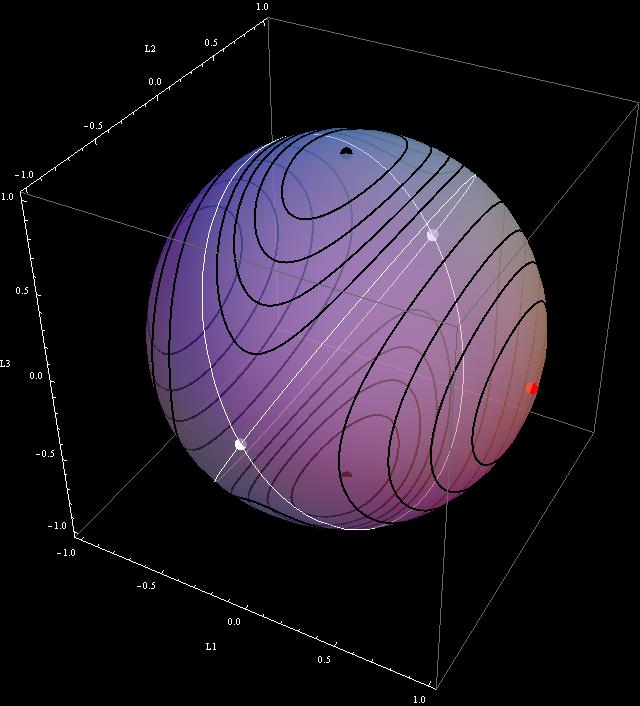 According to wikiHow to Critique Artwork I should really do the following:

Color.
Shapes, forms and lines.
Texture.
Light and shadow.
How each technical element contributes to the mood, meaning and aesthetic sensation of the artwork.

But even before doing that, there is something very very very important that was in part 1: “Objects in the painting” – that I did not delve deep enough into. The point is that the artist is presenting here certain particular impressions about a certain object. And the object is not some abstract sphere in some “angular momentum space”. The object is real, is pretty, is simple, and is mysterious – in our ordinary 3D space, floating over the water, under blue cloudy skies. Here it is: 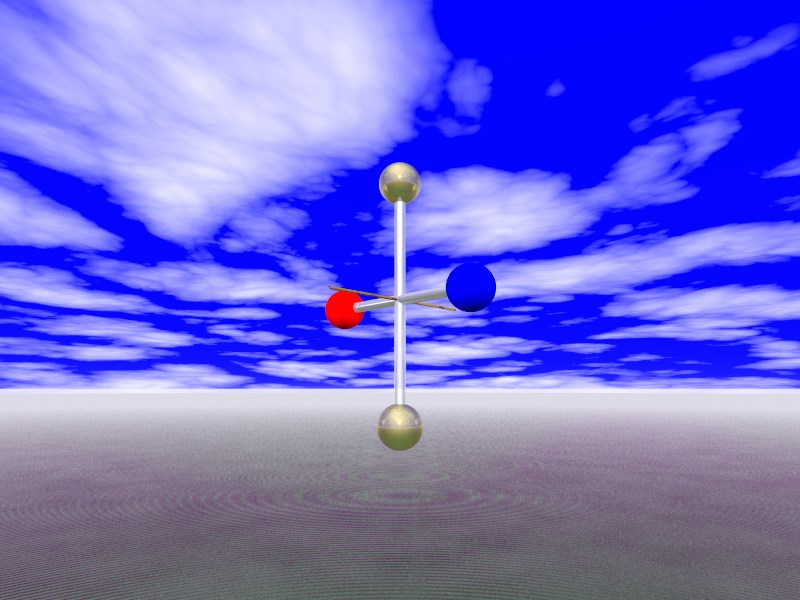 So, what is this object? It is not a drone. More like an UFO. It consists of four spherical masses. It is not important how large these spheres are. Here they seem to be quite large, but, in fact, life is simpler when they shrink to points. What is important is that they are heavy. Each mass in the picture is, say, 1/2 kg. The blue and red masses are connected by a weightless rod of length 2m. The bronze metal masses are connected by a weightless rod that is

m long. There is also the third, thin and weightless, rod that is perpendicular to the other two. It plays no role whatsoever, no masses are attached to its ends. It is there just for pure pleasure of the Creator.

The center of mass of our top is at its geometrical center, where the joining rods intersect. Let us agree that the axis joining the bronze masses is the first, say,

-axis. The axis joining red and blue masses is the second,

-axis, and the perpendicular axis, with no masses attached, is the third, the

Let’s recall how we calculate the moments of inertia of a system of masses. Here is the extract from Hyperphysics site: 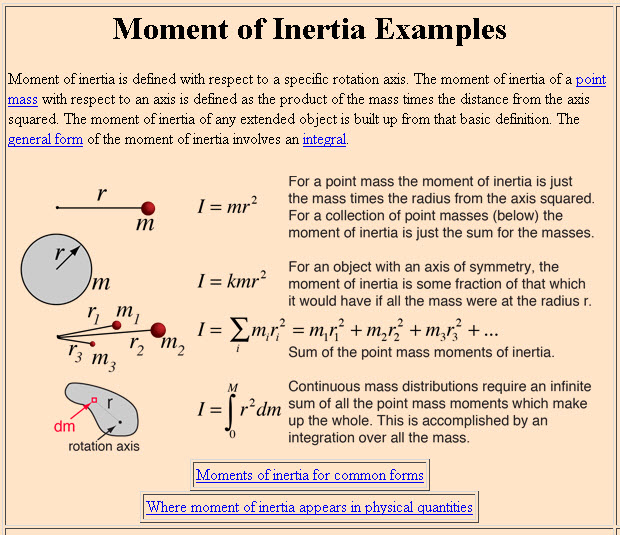 We calculate now the moment of inertia

with respect to the first axis. There are two masses, each

, rotating about this axis, each at the distance

. The moment of inertia (I will skip the units, like kg and m) is

Now let us see these moments of inertia in a spectacular action of freely rotating in space. Not just rotating! Rotating and the flipping.

Yes, these balls do move and flip! As if they were alive! Yes, rotating and spinning and flipping opens the door of perception to other dimensions. And we will learn it all. No joking, it all. But now we have a movie, and we will have to learn about How to Write a Movie Review…