of linear transformations of

Vectors tangent to orbits of this group form a vector field. Let us find the formula for the vector field generated by

we find the vector field

is a matrix with components

Vectors tangent to coordinate lines are often denoted as

. Therefore we can write the last formula as:

Bengtsson and Sandin in their paper “Anti de Sitter space, squashed and stretched” discussed in the previous note use coordinates

Vectors from the fields

are tangent to SL(2,R). We have expressed them in coordinates of the group SL(2,R)

The manifold of SL(2,R) is a hipersurface of dimension 3 in

. What is the relation between components of the same vector in different coordinate systems? The formula is easy to derive and is very simple. If

are coordinates of the vector in SL(2,R) and

are coordinates of the same vector in

? That is simple. In SL(2,R) vector fields in coordinates we have represented each matrix

On the other hand, Becoming Anti-de Sitter, we represented it as

in terms of the generators of O(2,2) used in the paper on anti de Sitter spaces. Here is what I have obtained: 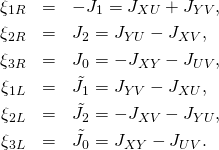 Bengtsson and Sandin introduce then their own parametrization of SL(2,R) and study the invariant metric on the group. We will find the connection between ours and their approaches in the next posts. We came to our problems starting from T-handles spinning freely in zero gravity. They are studying spinning black holes. It is interesting to see and to research similarities.