Dzhanibekov effect has attracted my persistent attention in Mai 2016. I knew about it next to nothing and understood even less. All I knew at that time were movies like that below.

Of course it was acting on my imagination and I wanted to understand. So, I started reading about the classical mechanics of rigid bodies. I like math, I am not particularly afraid of it, if I need to learn some stuff – I learn. But I also like computer programming. And I have found that my understanding enters so to say new level, when I can simulate solutions of abstract equations on my computer, play with them. Therefore I was searching not only for a theory behind the effect, but for computer code that would help me to test abstract ideas. And that how I have found a relatively recent paper by Marcello Romano “Concise Form of the Dynamic and Kinematic Solutions of the Euler-Poinsot Problem“, published in the Proceedings of the First IAA Conference on DYNAMICS AND CONTROL OF SPACE SYSTEMS 2012. 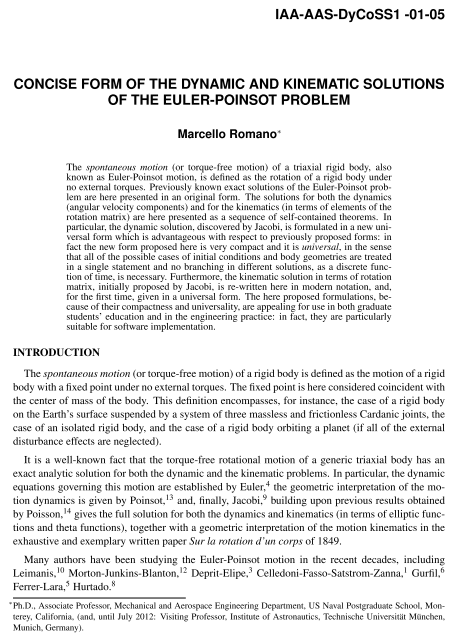 “It is a surprising fact that the exact solutions of the Euler-Poinsot problem are rarely taught in graduate courses of astrodynamics, or used in the engineering practice. It is even more surprising, in particular, that the kinematic solutions by Jacobi in terms of rotation matrix elements, as well as the associated remarkable geometric interpretation, are overlooked in the literature, and do not appear in any textbook of astrodynamics or celestial mechanics (to the best knowledge of the author). Two possible reasons of this fact are:

Towards the end of his paper Ropmano wrote:

NUMERICAL EXPERIMENTATION
A library of software algorithms, based upon Theorems 3 and 4, has been coded in Mathematica and successfully tested, by comparing the results of the numerical evaluation of the analytical expressions with respect to the results of numerical propagation of the differential equations of motion, for several sample cases of body geometries and initial conditions.

That was something that I was looking for and so, I searched the net to find out about the author of “Concise Form of the Dynamic and Kinematic Solutions of the Euler-Poinsot Problem”.

That is how I found that he is a Director of Spacecraft Robotics Laboratory in Naval Postgraduate School and is interested in Navigation and Control of Autonomous Robotic Vehicles with emphasis on Spacecraft Attitude Maneuvering and Spacecraft Orbital Proximity Maneuvering
In the Navy they are surely interested in satellite control:

That was interesting, so I wrote to him asking for the Mathematica code that he has mentioned in his paper. He wrote me back that he has lost track of this particular computer code, the reason being that he has changed computers several times in the meantime. Well, I thought, the code lies probably somewhere on the bottom of the ocean, I need to write my own code. But first I have to understand Marcello’s paper. So, I started studying it, and after a day or two I have found that I better write my own paper. But Marcello was particularly right with one thing: general lack of familiarity regarding the Jacobi elliptic and theta functions. We will not need theta functions here, because I am choosing a different method than his. But we will need Jacobi elliptic functions, and so in a couple of forthcoming posts I will have to post a mini-tutorial on the subject. Then we will have to learn what is Euler-Poinsot problem, and what it has to do with flipping nuts with pole shifts of our planet….