I can’t help it. I am obsessed with geodesics.
Quoting from Encyclopedia of Mathematics:

The notion of a geodesic line (also: geodesic) is a geometric concept which is a generalization of the concept of a straight line (or a segment of a straight line) in Euclidean geometry to spaces of a more general type. The definitions of geodesic lines in various spaces depend on the particular structure (metric, line element, linear connection) on which the geometry of the particular space is based. In the geometry of spaces in which the metric is considered to be specified in advance, geodesic lines are defined as locally shortest. In spaces with a connection a geodesic line is defined as a curve for which the tangent vector field is parallel along this curve. In Riemannian and Finsler geometries, where the line element is given in advance (in other words, a metric in the tangent space at each point of the considered manifold is given), while the lengths of lines are obtained by subsequent integration, geodesic lines are defined as extremals of the length functional.

Geodesic lines were first studied by J. Bernoulli and L. Euler, who attempted to find the shortest lines on regular surfaces in Euclidean space. 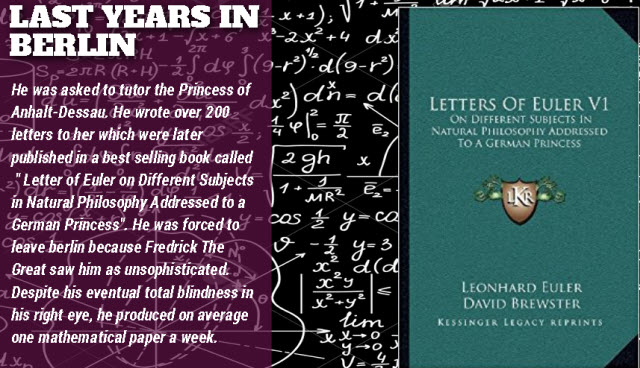 I am drawing geodesic lines on 3-sphere

You do not have to know that these are geodesic lines. In Moliere’s play Le Bourgeois gentilhomme

The play takes place at Mr. Jourdain’s house in Paris. Jourdain is a middle-aged “bourgeois” whose father grew rich as a cloth merchant. The foolish Jourdain now has one aim in life, which is to rise above this middle-class background and be accepted as an aristocrat. To this end, he orders splendid new clothes and is very happy when the tailor’s boy mockingly addresses him as “my Lord”. He applies himself to learning the gentlemanly arts of fencing, dancing, music and philosophy, despite his age; in doing so he continually manages to make a fool of himself, to the disgust of his hired teachers. His philosophy lesson becomes a basic lesson on language in which he is surprised and delighted to learn that he has been speaking prose all his life without knowing it.

We are speaking geodesics all the time without knowing it. 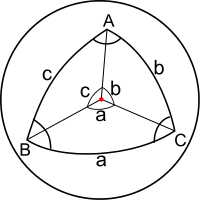 A smart ant would travel from A to B along path c, from A to C along b, and from B to C along a. These are lines as straight as only possible, that are on the surface. Geodesics on the ideal sphere are all of finite length, the maximal ones are closed, they are great circles.

But if the sphere is not so ideal, if it is a three-axial ellipsoid, even if a little bit deformed from being ideally spherical, then everything changes. Geodesics do not close, they can behave in a strange way. Again, on a small scale, they are as straight as possible, but going always “straight” we can, after long enough time, find ourselves almost everywhere. This is a difficult subject – see Geodesics on an ellipsoid.

We are not on an ellipsoid, but we are on something similar in spirit: we are on three-dimensional sphere

endowed with three-axial geometry. It is the three moments of inertia

that determine geometry of our

is the whole universe of the rigid body that is rotating about its center of mass. Three parameters determine rotation matrix. Unit quaternions which we use do the same. But not all rotations are equal. Some are for the body “harder” than other, some are “easier”. This depends whether the instantaneous rotation axis is close to the one with the greatest moments of inertia, or the smallest one. Therefore also “distance” between two rotations that somehow measures “effort” exerted by the body, will depend on the direction in

I know, we will have to learn all that. But, on the other hand, it is something that should be expected. For some reason that we do not fully understand, lot fundamental equations of dynamics can be derived from “least action principle”. But least action can be translated into “shortest way”- with the appropriate definition of the distance. Therefore, perhaps, all physics can be converted into geometry, and the Nature is simply choosing always the shortest path (or, sometimes, the longest).

So, here is again the same animation, but there are more details. 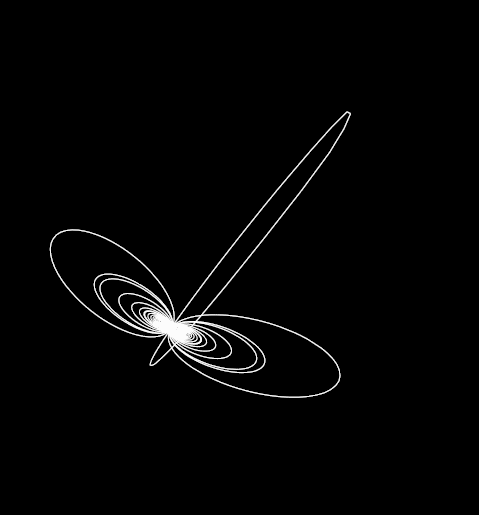 You will have to click on the image to open animation in a new window. There are 91 frames. I am rotating the observer every one degree from 0 to 90 degrees. Something rather strange happens around 84 degrees. That is the extracted frame above. The animation represents one geodesic line. I mean part of it. Time goes from -2000 to 2000 (of whatever units we use). It can go from minus infinity to infinity. I have no idea how the picture would change with the extension of the length of time. Probably it would be getting denser and denser. The phenomenon here may be similar to the one exhibited by the famous chaotic Lorentz attractor.