When I was in the middle of writing this post, question came in a comment from Bjab

New Note after posting everything here: As has just been pointed to me by Ronan, I have already covered this issue in Infeld, Einstein and blogging . While, there is no harm in covering the same issue twice, the fact that I have forgotten tells something about the workings of my memory. But collective memory (of all readers) seems to be the answer.

I checked, and indeed I could not find the place where I have treated this problem with clarity. It is my ambition to write extremely clear, better in this respect than anyone else in the whole universe, but here we have a hole. Since this post was anyway supposed to be exactly about the case of

I will start with describing the case in details (and, as we know, the devil is hiding just there). 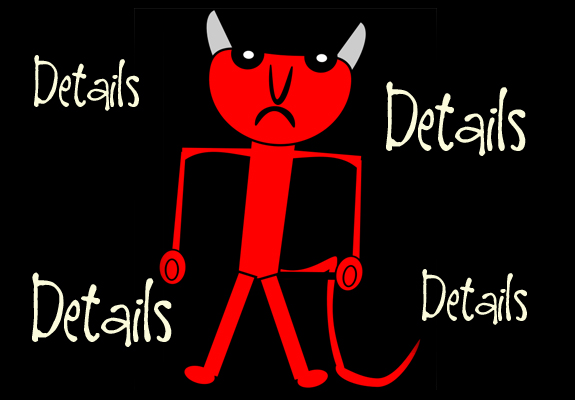 To begin with the beginning: when considering a free rigid body rotating about its center of mass, the most important parameter characterizing the rotation is the parameter

of the angular momentum vector (that is also constant during the motion). In order to simplify the notation let us assume that

is normalized so that

are the components of the angular momentum vector with respect to the frame attached to the body. It follows almost directly from the definitions that the value of

is in the interval

is very special, there is only one flip of the body – it is “the archetype of Dzhanibekov effect”.
The first step in finding explicit solution to the equations of motion is to solve Euler’s equations:

A solution is given by the following explicit formula adapted from Solving Euler’s equations:

In Solving Euler’s equations the solution is given for

. To get the solution for

we simply multiply the constants 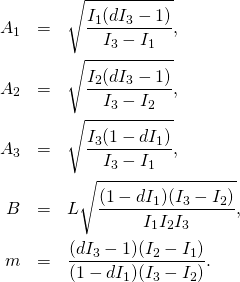 In the formulas (3) Jacobi elliptic functions

are somewhat formally extended to cover the case of

We see that perhaps it is useful to introduce new constant

that is equal to the old

Therefore, after some little calculation, we get

It is also useful to introduce new

. Finally, we can now rename old 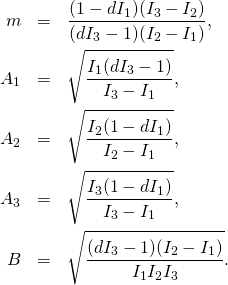 I wrote “a solution”. In fact it is almost the most general solution. Every solution can be obtained by shifting the time

and, if necessary, putting minus signs in front of two of the three formulas for

That was an extra for this post because of the question from Bjab. Now comes what I was going to post today originally.

This is a continuation from the previous post Spinning Gulliver among giants. Another example from the paper: Elena Celledoni, Antonella Zanna, et al. “Algorithm 903: FRB–Fortran routines for the exact computation of free rigid body motions.” ACM Transactions on Mathematical Software, Volume 37 Issue 2, April 2010, Article No. 23, doi:10.1145/1731022.1731033

I will make it short and sweet, because the reasoning will be like in Spinning Gulliver among giants. At the same time I will stress the differences. This should also help to understand the algorithm I am using for the case

I am using Mathematica, and in the forthcoming posts I will mention how to adapt it to Maple (which at the same time will answer the comment from Ronan).

I am taking now “example0” from Fortran code examples that accompany the paper by Celledoni and Zanna. These examples can be downloaded in a zip file using the link to the code here. (though I got the file directly from one of the Authors – A.Z.).

The description of example0 in a Readme file: “driver_example0.f (example of FRB integration in a single step from 0 to Tfin). To be linked with frb_step.f”.

At first I was playing with these data. But then, reading Readme.txt, I noticed that: “driver_example2.f (Like driver_example0.f, but uses quaternions in place for rotations). To be linked with quat_step.f“. So I checked example2, and I noticed that there the initial attitude matrix is given by the unit quaternion 1. That is the initial attitude matrix is the identity matrix as it was in the example we have already discussed in Spinning Gulliver. Therefore I decided to change the example and to use the identity matrix here as well. So I will be discussing the slightly modified version of the original example.

To Mathematica I enter these data:

I checked that the initial angular momentum vector has indeed length 1, as it is supposed to have. We now calculate

This is more difficult case. The modulus

) would come greater than 1. While Mathematica has elliptic functions with

other software may have them only for

We were discussing before how to convert from

. Here I will be using the results of our previous discussions. So,

below will be already inverted, therefore smaller than 1. Here are the formulas for our case:

In our simulations for this case in many previous posts we were using:

But now we see that L10 is negative. This is a different Poinsot orbit. Therefore we have to change the sign of L1. We know that when we want to have Euler’s equations still satisfied, we have to change also one other sign. Let us choose L2 ( I could instead change L3, then

would be different, but all the conclusions would be the same). Thus what we will use is

Note: I have not yet discussed the formula for

It needs to be discussed. But we will not be using it in this post anyway.

Notice that here I had to put minus sign in front of L20. That is because we have changed the sign in the formula for L2.
I use Mathematica and get

We go to Wolfram Alpha, enter there our data for

The Reader can check L2, and L3 (I have already checked with Mathematica).

As this post became longer than I indented, and as there are things that I have to ponder about before next post, let us call it a day!