I did not post anything new on my blog yesterday. Not because it is Saturday. And not because I was celebrating the fact that I have just received a personal email from Владимир Джанибеков – Vladimir Dzhanibekov, the former Cosmonaut and Commander of the French Legion of Honour – while I writing the series about Dzhanibekov effect. 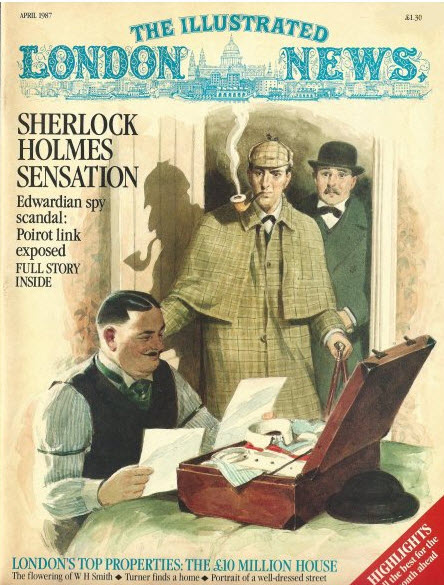 I did not write my regular post yesterday because all the day long I was busy solving a mystery. It was a real detective work. It needed joined powers of Sherlock Holmes and Hercule Poirot while working on the case of inverted modulus. What is the the case of inverted modulus I will soon explain. Roughly it is a very clever crime, with very well hidden motives and very famous participants. And yes, it is directly related to Dzhanibekov effect! By the way in his email to me of yesterday Dzhanibekov confesses that his effect is still a mystery for him. So we have a double mystery, a mystery within a mystery. Indeed doubled efforts are needed. According to one opinion:

“While both of them are arrogant and conceited, I believe Poirot is cooler and smarter!(There I said it…) He is not doing things in a grandiose manner as Holmes is prone to do, but mostly working out things in that egg-shaped head of his. He is also very polite though a wee bit condescending towards his interviewees, but is always a thorough gentleman and seems to empathize about the vicissitudes of a criminal mind. Holmes on the other hand comes across as being cold most of the times, though I am not sure there might have been times when he was a little more humanisque than a precise surgeon who does his job.”

But, well, we are not discussing here the literary characters of Arthur Conan Doyle and Agata Christie – we are dealing with reality, not a fiction, have a real case, even if it is in the Platonic world of mathematical concepts. So what is the case about?

defined for all real

I checked several textbooks, and have found that many authors explicitly assume that

while others are suspiciously silent about the allowed values of

But what about the formal definition as used for instance in Abramowitz-Stegun Handbook: 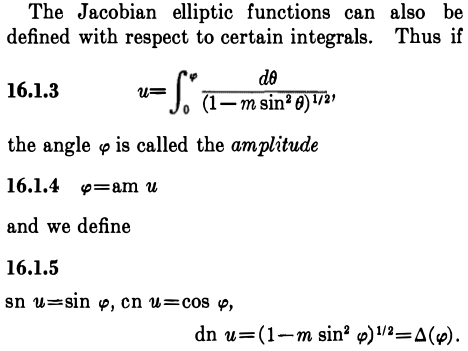 Therefore it is apparently possible to have

If so, the why so many textbooks assume explicitly

would allow us to write down the explicit solution of Euler equations for free asymmetric top in one formula, independent of the value of the kinetic energy. Yet in so many books and papers the authors are using two different formulas for two different kinetic energy ranges. Why?

I asked myself this question because I am trying to understand the subject I am writing about. And so yesterday I was all day long busy with solving the mystery. Finally I have solved it – to my satisfaction. And now I will describe my solution in detail. This morning, after I already started writing this post, I have found essentially the same solution an a paper Elliptische Integrale und Funktionen nach Jacobi by Ralph Hopke, and in Chapter 3.9 Further Transformations of the Modulus of the monograph Elliptic Functions and Applications by Derek F. Lawden. And yet I am going to explain here the solution in as simple terms as I can I hope that someone will find it useful.

The original name of Jacobi elliptic sn function was sinus amplitudinis. One contemplates the integral

– that is how sinus amplitudinis was invented.

First let us contemplate the integral 1. If

The integrand is always positive, therefore

is strictly increasing function of

? From the definition we see that

is antisymmetric function of

therefore let us restrict ourselves to

is smaller that the critical value

, the integral is finite and is an increasing function of

These two last sentences are false. The inverse function is defined not for all

. Cf. The case of inverted modulus – Treading on Tiger’s tail.

It is only that the range of

but there is nothing wrong with it. We will deal with the beauty of Jacobi’s amplitude in the next post. Here we are interested in sinus amplitudinis. WE now know that it is well defined for all real values of the modulus

Therefore it should be now possible, using the definition, to prove the mysterious modulus transformation formula from Abramowitz-Stegun, which can be written as:

The proof of the above formula is, as Sherlock Holmes would say, elementary. Perhaps, but not without Watson’s hard work and not without the hindsight from Poirot after his conversation with Hastings. It is a simple case of a clever change of variables in the integral.

We first consider the RHS:

According the definition we write

This is always possible since

so that there exists

satisfying Eq. 5. We then have

Let us consider now the left hand side of Eq. (2):

Using the definition of

We thus see that

So, essentially, the mystery is solved and the case can be closed.

I must confess that at the beginning, instead of substitution as in Eq. (5) I was trying

It did not work though.

The next post will be about the beauty of Jacobi’s amplitudinis.

4 thoughts on “Jacobi Elliptic SN – The case of inverted modulus”