“Standing on the shoulders of giants” was the title of my Polish blog post that was addressing the issue I need to address here and now, in my English blog.
From Wikipedia:

The metaphor of dwarfs standing on the shoulders of giants (Latin: nanos gigantum humeris insidentes) expresses the meaning of “discovering truth by building on previous discoveries”.[1] This concept has been traced to the 12th century, attributed to Bernard of Chartres. Its most familiar expression in English is by Isaac Newton in 1676: “If I have seen further, it is by standing on the shoulders of giants.”[2]

With us the story is that we also want to see further. But can we? Is that possible? Can a simple blog provide better information than original papers and monographs written by experts? To my own surprise I have found that yes, it can. Experts are human beings, they are always in a hurry, changing subjects of their research, making errors, leaving holes in arguments, and hoping that if there is someone really interested in the subject, then she/he will fix the errors, fill the holes, simplify the arguments, bring new observations.

Here is the image from Wikipedia: 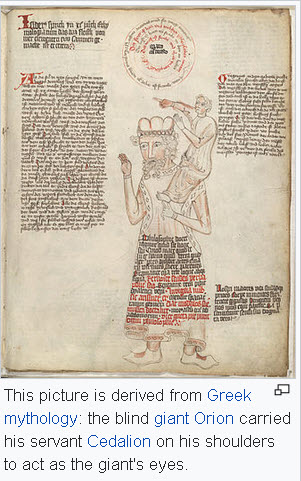 And indeed we can provide additional pairs of eyes. My own adventure with the mechanics of flipping tops was possible because of several papers that I tried to study. I say “tried”, because I was not able to understand everything from these papers. Usually, after a year I have problems with understanding my own papers! But the paper that I really-really liked was this one: 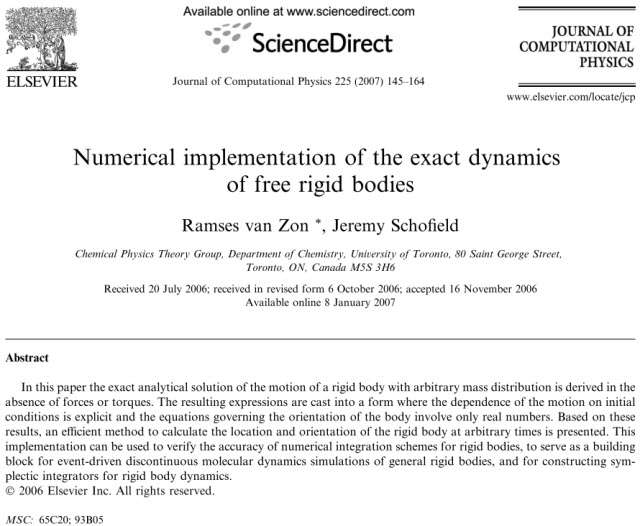 Abstract
In this paper the exact analytical solution of the motion of a rigid body with arbitrary mass distribution is derived in the absence of forces or torques. The resulting expressions are cast into a form where the dependence of the motion on initial conditions is explicit and the equations governing the orientation of the body involve only real numbers. Based on these results, an eﬃcient method to calculate the location and orientation of the rigid body at arbitrary times is presented. This implementation can be used to verify the accuracy of numerical integration schemes for rigid bodies, to serve as a building block for event-driven discontinuous molecular dynamics simulations of general rigid bodies, and for constructing symplectic integrators for rigid body dynamics.

Then I also learned a couple of ideas from

Then I have found even more recent paper:

Marcello Romano, “Concise Form of the Dynamic and Kinematic Solutions of the Euler-Poinsot Problem“, Advances in the Astronautical Sciences Volume 145, (IAA-AAS-DyCoSS1-01-05), (2012)

It is this last paper that encouraged me to study the subject deeper. Romano, in particular, wrote:

It is a surprising fact that the exact solutions of the Euler-Poinsot problem are rarely taught in graduate courses of astrodynamics, or used in the engineering practice. It is even more surprising, in particular, that the kinematic solutions by Jacobi in terms of rotation matrix elements, as well as the associated remarkable geometric interpretation, are overlooked in the literature, and do not appear in any textbook of astrodynamics or celestial mechanics (to the best knowledge of the author). Two possible reasons of this fact are: the general lack of familiarity regarding the Jacobi elliptic and theta functions, and the inconvenient treatment of initial conditions and body geometry related to the usual formulation of the solutions (as given, for instance, limited to the dynamics, by Hughes and Wittenburg).
It is the goal of the author to foster, with the present paper, an increased familiarity, dissemination and utilization of the exact solutions of the Euler-Poinsot problem.

Well, well. For dissemination what can be better than the blog? So, here I am – disseminating! And doing it according to my own taste and feeling of what is simple and what is interesting.

Here we go, with the dissemination task. We are done with exact solutions of Euler’s equation for the free asymmetric top. But that is only half of the whole problem. We are dealing with mechanics or, better, dynamics. It was created by Newton and then, having particularly in mind rotating bodies, developed by Euler. The fundamental equation of dynamics is known from schools:

and we have acceleration

To solve a mechanical problem we need to find

With rotating bodies it is similar, except that instead of “velocity” we have “angular velocity”, and instead of “position” we have “orientation” (described by the “attitude matrix” 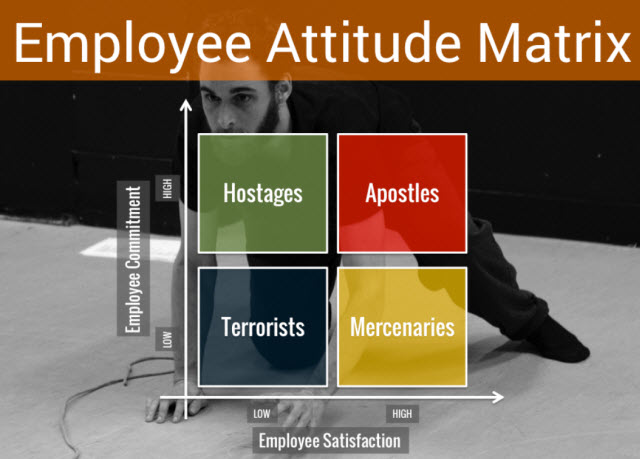 Employee Attitude Matrix
Employees can be divided into 4 groups using the employee commitment and employee satisfaction. They can be apostles, mercenaries, hostages and terrorists. The organisation should have a plan for all groups because they have different needs. They need to receive different messages from the leadership team.
:)

In previous posts we have learned how to solve Euler’s equations. They give us angular velocity

in the body frame. But in order to find the orientation of the body with respect to the laboratory, we need to integrate the equation that relates the attitude matrix

Here I will rely on the content of the post Angular momentum. From Eq. (1) therein we have

where we have used the relation between angular momentum and angular velocity:

, the attitude matrix, is an orthogonal

real matrix. When we find it, we will know how the body rotates in space, as seen from the laboratory inertial frame. In order to find

we need to solve the differential equation. In fact

is a matrix with

is given at the initial time

then the solution exists and is unique. This is encouraging but not very helpful. From the matrix form (1) we also see that if

is a solution, and if

is a fixed orthonormal matrix, then

is also a solution. It has very simple interpretation:

represents the motion with respect to a rotated laboratory, rotated by the rotation matrix

of our equation is of that form. Thus, if we find just one solution of our equation, then we know them all. But we need to find one. It is from the paper by van Zon and Schofield mentioned above that I learned the trick of how to simplify the task of solving nine differential equations. By using geometric reasoning it is possible to reduce the number of equations that need to be solved from nine to just one! It is quite possible that van Zone and Schofield learned the trick from someone else. That is what “standing on the shoulders of giants” means in practice. Albert Einstein was known for standing on the shoulders of others quite often, without quoting them explicitly. Apparently in his mind it is not important who does something, it is important what is being accomplished. I am not that original, I like to quote other people work, who were working in a similar direction, even if I am not using their results.

But let us return back to “what”, that is what the simplifying trick is about. We have reference frames, and we have angular momentum vector

has in this frame components

is the length of

How to do it in practice?? We do not have to worry about it now, after all we are solving our equations in theory. When we are done with the theory, then we can return to the real world.

So, in the laboratory our vector

There are many orthogonal matrices that do just that. Suppose

is an orthogonal matrix that keeps the vector

fixed. It must be a rotation about the third axis. Therefore

is of the form:

Can we find easily some

is indeed orthogonal, and that

(even though checking it by hand is easy):

given as our solution of Euler’s equations. Therefore we know

It remains now to substitute

into Eq (1), find differential equation for