In Nobody understands quantum mechanics, but spin is fun we met three Pauli matrices

. They are kinda OK, but they are not quite fitting our purpose. Therefore I will replace them with another set of matrices, and I will call these matrices

They are defined the same way as Pauli matrices, except that

would have in Eq. (4) plus signs on the right. We want minus signs there. Why? Soon we will see why. But, perhaps, I should mention it now, that when Pauli is around many things go not quite right. That is the famous “Pauli effect“. From Wikipedia article Pauli Effect:

The Pauli effect is a term referring to the apparently mysterious, anecdotal failure of technical equipment in the presence of Austrian theoretical physicist Wolfgang Pauli. The term was coined using his name after numerous instances in which demonstrations involving equipment suffered technical problems only when he was present.

In 1934, Pauli saw a failure of his car during a honeymoon tour with his second wife as proof of a real Pauli effect since it occurred without an obvious external cause.

You can find more examples in the Wikipedia article. The car breakdown during a honeymoon with Pauli’s second wife is somehow related to the change of the sign of the second matrix above. And now it is easy to relate our second set of matrices to quaternions. It was Sir William Hamilton who introduced quaternions in 1843. There were three imaginary units 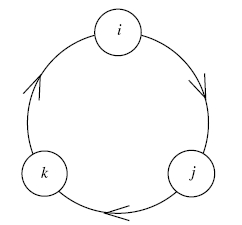 Hamilton, when he invented quaternions, he thought of them as of abstract objects obeying simple algebra rules. But now we can realize them as complex matrices. To this end it is enough to define

and notice that the algebraic relations defining the multiplication table of quaternions are automatically satisfied! If we would have used Pauli matrices

we would have to use

in the above equations – which is not so nice. You would have asked: why minus rather than plus?
Some care is needed, however. One should distinguish the bold

– the first unit quaternion, from the imaginary complex number

One should also note that the squares of the three imaginary quaternionic units, in their matrix realization, are

that is “minus identity matrix”, instead of just number

as in Hamilton’s definition.
In the matrix realization we also have:

In matrix realization it is represented by the matrix

is represented by Hermitian conjugated matrix. Notice that

They are represented by matrices

that is by unitary matrices. Moreover we can check that then

Therefore matrices representing unit quaternions are unitary of determinant one. Such matrices form a group, the special unitary group

Yet, to dot the i’s and cross the t’s, we still need to show that every

unitary matrix of determinant one is of the form (9). Let therefore

be such a matrix

we can easily check that

On the other hand

is unitary, that means

Therefore we must have

We are interested in rotations in our 3D space. Quantum mechanics suggests using matrices from the group

We now know that they are unit quaternions in disguise. But, on the other hand, perhaps quaternions are matrices from

in disguise? When Hamilton was inventing quaternions he did not know that he was inventing something that will be useful for rotations. He simply wanted to invent “the algebra of space”. Maxwell first tried to apply quaternions in electrodynamics (for

operators), but that was pretty soon abandoned. Mathematicians at that time were complaining that (see Addendum to the Life of Sir William Rowan Hamilton, LL.D, D.C.L. On Sir W. R. Hamilton’s Irish Descent. On the Calculus of Quaternions. Robert Perceval Graves Dublin: Hodges Figgis, and Co., 1891. ):

As a whole the method is pronounced by most mathematicians to be neither easy nor attractive, the interpretation being hazy or metaphysical and seldom clear and precise.’

But we still have to relate the matrices

to rotations, and to learn how to use them. Perhaps I will mention it already here, at this point, that the idea is to consider the rotations as points of a certain space. We want to learn about geometry of this space, and we want to investigate different curves in this space. Some of these curves describe rotations and flips of an asymmetric spinning top. Can they be interpreted as “free fall” in this space under some force of gravitation, when gravitation is related to inertia? Perhaps this way we will be able to get a glimpse into otherwise mysterious connection of gravity to quantum mechanics? These questions may sound like somewhat hazy and metaphysical. Therefore let us turn to a good old algebra.

in our 3D space we can associate Hermitian matrix

In fact, as it is very easy to see, every Hermitian matrix of trace zero is of this form. Notice that

be a unitary matrix. We act with unitary matrices on vectors using the “jaw operation” – we take the matrix representation

of the vector in the jaws:

is also Hermitian. Since

is of trace zero and

is also of trace zero. Therefore there exists vector

Therefore we must have

In other words the transformation (which is linear)

is an isometry – it preserves the length of all vectors. And it is known that every isometry (that maps

, which is the case) is a rotation (see Wikipedia, Isometry). Therefore there exists a unique rotation matrix R such that

This way we have a map from

– the group of orthogonal matrices. We do not know yet if

which is the case, but it needs a proof, some proof….