The recollections in the last post were incomplete. So, here is the continuation.
We have derived the property

On the other hand we stressed the fact that

given a unit vector

From these two properties we can deduce the third one:

is a rotation, then rotation about the vector

The proof of the above follows by expanding

as a power series, and noticing that

I will use spin equivalent of Eq. (3) when explaining how exactly I got the two images from the last post that I am showing again below: 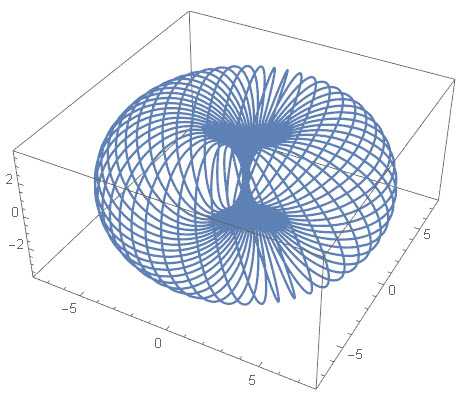 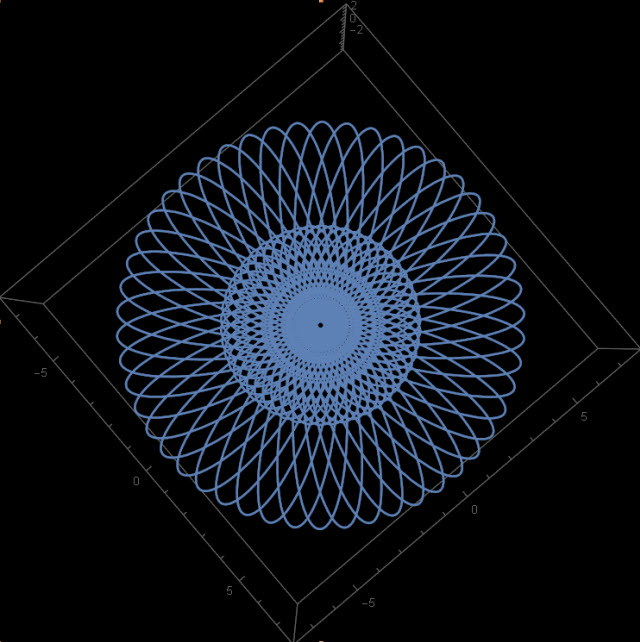 The advantage in using Eq. (3) is that it may be easy to calculate the exponential

but not so easy the exponential

Our aim is to draw trajectories in the rotation group

made by the asymmetric top spinning about its largest moment of inertia axis, which in our setting is the third axis. As the rotation group

is not very graphics friendly, we are using the double covering group

or, equivalently, the group of unit quaternions. We then use stereographic projection to project trajectories from the 3-dimensional sphere

But first things first. Before doing anything more we first have to translate the above properties into the language of

Therefore another recollection is necessary at this point. In Pauli, rotations and quaternions we have defined three spin matrices:

in such a way that for every vector

It follows immediately from the above formula that

is a group homomorphism, that is we have

At the end of Putting a spin on mistakes we have arrived at the formula:

which tells us that the matrix

describes the rotation about the direction of the unit vector

implement the same rotation. When

turn, but the matrix

. We need to make

vector level to have

rotation at the spin level. That is described by

in the exponential in Eq. (7).
At the spin level we then obtain the following analogue of Eq. (\ref:rqr}):

Now we can finally look back at the images of trajectories. In Seeing spin like an artist we noticed that rotation about the z-axis is described by the matrix

while rotation by the angle

about y-axis is described by the matrix

describes uniform rotation of the top about its z-axis, when the z-axis of the top and of the laboratory frame are aligned. As observed in Towards the road less traveled with spin that is not an interested path for drawing. To make the path more interesting we tilt the laboratory frame. To this end we use, for instance, the matrix

Now the axis of rotation of the top is tilted by 30 degrees with respect to the z-axis of the laboratory frame. We get new path of the evolution in the group

From Eq. (1) in Chiromancy in the rotation group we can now calculate real parameters

For a general matrix 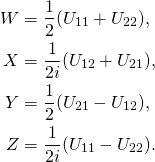 In our particular case we get: 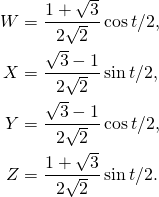 We then get rather awfully looking the parametric formulas for the stereographic projection: 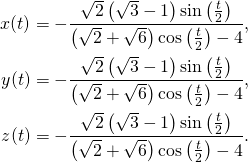 ) is not very interesting – just a circle: 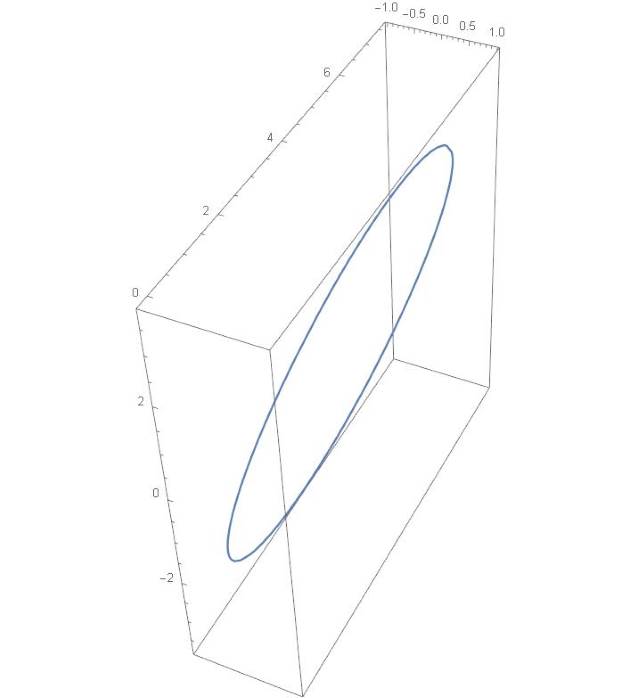 It is better than the straight line with a non tilted top, but not a big deal. But the next thing we want to do is to rotate the tilt axis in the (x,y) plane, that is about the

-axis of the laboratory. If we want to rotate by an angle

– according to Eq. (9). That is we should look at the trajectory:

Since anyway we are are going to run with

interval, we can as well use

Therefore we can draw

Here are the results from my Mathematica code: 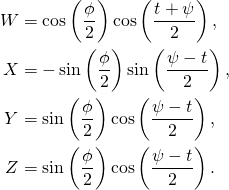 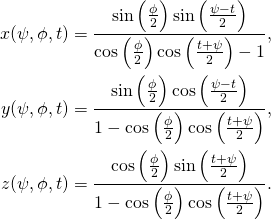 And here is the resulting of plotting 30 such circles, each for 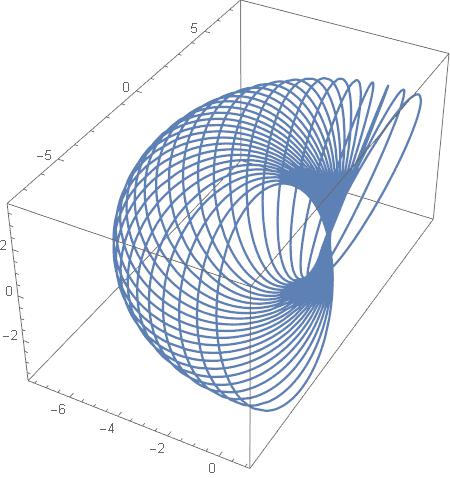 we get another, larger torus …
In the next posts we will disturb the motion of the top to see what kind of trajectories we will be getting then.