Academic textbooks are silent about T-handles making spectacular somersaults in space, with no forces acting, except of the old fashioned and mysterious “force of inertia”. And why is it so? My answer is simple: because of inadequate education. Inadequately trained are physicists and mathematicians. Therefore, of course, engineers as well. Not just inadequately educated. Lazy they are as well. Since they can learn from the available sources. But they do not want. They prefer going the parties and pubs, and watching movies. Learning about elliptic functions is too much of a trouble for them. It was not so some one hundred years ago. But it is very bad now, when what counts in science are “impact factor points” rather than knowledge. Papers are written nowadays not in order to share research results. They are written for providing “impact factor points”.

“The impact factor (IF) is a measure of the frequency with which the average article in a journal has been cited in a particular year. It is used to measure the importance or rank of a journal by calculating the times it’s articles are cited.”

10 simple strategies to increase the impact factor of your publication
“Impact factors are heavily criticized as measures of scientific quality. However, they still dominate every discussion about scientific excellence. They are still used to select candidates for positions as PhD student, postdoc and academic staff, to promote professors and to select grant proposals for funding. As a consequence, researchers tend to adapt their publication strategy to avoid negative impact on their careers. Until alternative methods to measure excellence are established, young researchers have to learn the “rules of the game”.”

The effect we are discussing, the so called Dzhanibekov effect, has been discovered by chance by the Russian cosmonaut and scientist V. A. Dzhanibekov in 1985.

The discovery apparently has been kept in secrecy for 10 years. But I think that the Americans have learned about this “secret” almost immediately and they charged their scientists, experts in gravity effects, with the task of checking if the effect is important for the Defense of the Country.

The Invention Secrecy Act of 1951 (Pub.L. 82–256, 66 Stat. 3, enacted February 1, 1952, codified at 35 U.S.C. §§ 181–188) is a body of United States federal law designed to prevent disclosure of new inventions and technologies that, in the opinion of selected federal agencies, present a possible threat to the national security of the United States.

I think that the experts quickly came to the conclusion that they do not see anything of a practical value here, there are no national security threats from nuts freely flipping in space, and therefore they decided to let the mathematicians to publish a paper on the subject:

The classical treatments of the dynamics of a tennis racket about its intermediate axis fail to describe a remarkable aspect of its motion which is revealed in the following experiment. Mark the faces of the racket so that they can be distinguished. Call one rough and the other smooth. Hold the racket horizontally by its handle with the smooth face up. Toss the racket into the air attempting to make it rotate about the intermediate axis (namely, the axis in the plane of the face which is perpendicular to the handle). After one rotation, catch the racket by the handle. The rough face will almost always be up! In other words, the racket typically makes a half-
twist about its handle.

It is rather lame when compared to the effect with a flipping T-handle that has been observed in space:

Burke was a physicist working on gravity. The three mathematicians together managed to conclude that strange behavior is to be expected. But they were not able to solve the problem completely. Cushmann tried to solve the problem later on. In 2000 he has published a set of lectures entitled “No polar coordinates“, where he admitted: “I am not a master of Weierstrass’ theory of elliptic functions, so I won’t do this integral. But Whittaker [42] is and he does it.” Strange, a mathematician, and he does not know how to integrate, and does not even want to know.

But we want to know, we want to tame the flipping T-handle. Domesticated, tamed animals are useful. 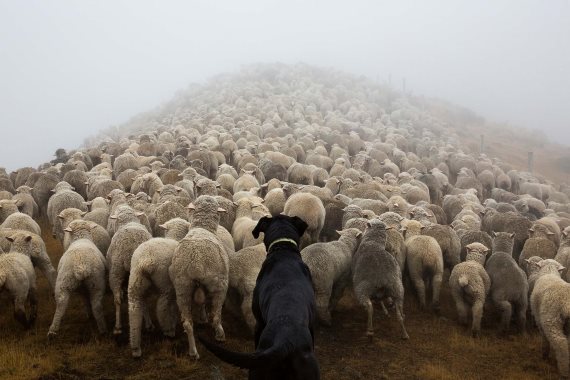 In the last post, Standing on the shoulders of giants, I used the ideas from the paper by Ramses van Zon, Jeremy Schofield, “Numerical implementation of the exact dynamics of free rigid bodies“, J. Comput. Phys. 225, 145-164 (2007), and we came to the point where we have represented the attitude matrix

is the solution of the Euler equations (this time we write them in terms of angular momentum rather than angular velocity):

The task is now to derive the differential equation for

Getting the differential equation for

is now a purely mechanical task. Therefore I will simply show the end result, and then show the REDUCE code that verifies this result. The result is:

And here is the REDUCE code. It has two parts. Here we use the first part, but at the end of this post we are also using the second part:

– see Solving Euler’s equations. Here we adapt these formulas so that they give the solution for 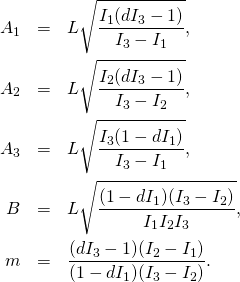 That is another purely mechanical task. Therefore again I give the result and show the REDUCE code verifying it.

We have differential equation for

. We need to solve it. Van Zon and Schofield as it seems got tired towards the end of their paper and they did give us a nice formula. We will get such a nice formula in the next post.